The war at our doorstep

News came today of the death of a consular employee of the US consulate in Ciudad Juarez, just south of El Paso, Texas. She was gunned down along with her husband, who worked for the El Paso County Sheriff's Department. Their baby survived the attack, and police found her crying in the backseat.

In a separate attack, a third person related to the consulate, the Mexican husband of a Mexican consular employee, was also killed.

The White House is "furious." Quoting the Washington Post:


The White House said President Obama was "deeply saddened and outraged" by the slayings, which occurred in broad daylight. They appeared to be the latest sign of the surge of drug violence in Mexico in recent years, which has claimed thousands of lives in border areas such as Ciudad Juarez. But it was unusual for U.S. citizens to be slain -- particularly an American government employee.

State Department officials said authorities were still investigating whether the victims were targeted by drug gangs, but it did not appear that the slain consular employee was involved in counternarcotics work. Her in-laws identified her as Lesley A. Enriquez, 35, of El Paso, just across the border. She was a locally hired employee of the consulate whose job involved helping U.S. citizens, American officials said. 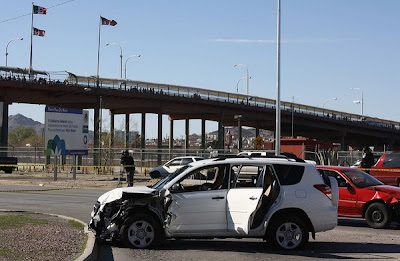 The Los Angeles Times also has the story, from which I took the picture of the crime scene above.

The attacks were vicious. From WaPo again:


According to Diario de Juarez, gunmen firing bullets chased the couple's white van shortly after 2 p.m. Saturday, and it swerved out of control, crashing into oncoming traffic near the bridge linking the two countries.

About the same time, the third victim, the husband of a consulate employee, was killed as he traveled in another part of Juarez in his late-model Honda, according to Diario de Juarez. The gunmen boxed in the man's car, shot him and wounded his two children, according to Reuters.

Were Ms Enriquez somehow connected to the execution of the Drug War, there could at least be some perverse comfort in thinking that the battles raging in the Mexican states that abut California, Arizona, New Mexico, and Texas were being neatly confined, but I don't think we have that luxury anymore. Innocent people are being taken down, along with the bad guys and the good guys trying to take down the bad guys. It's a mess.

And it's not a new mess. In fact, I cited this at One Free Korea as a good reason to first think long and hard about the idea of arming North Korean citizens to fight their current oppressors: after KJI and his cronies are gone, an armed thugocracy with a drug empire to defend would be in a position to get the guns and terrorize the populace, perhaps with comparable bloodshed with the present day.

Does that sound far-fetched? Consider these numbers: according to the Los Angeles Times, nearly ten thousand people have died in Mexico's drug war since January 2007 (WaPo says 18,000 since December 2006), with over four thousand occurring in Baja California, Sonora, Chihuahua, Coahuila, Nuevo Leon, and Tamaulipas, the six Mexican states that border the United States.

Chihuahua, at the doorstep of New Mexico and Texas and where Juarez is located, is where a whopping 2500 of those deaths occurred. In Baja California, just south of San Diego, another 900 have died. Residents of American border communities — both rural and urban — are already complaining that the violence has spilled over to their neighborhoods. This is becoming our war.

If Ms Enriquez and her husband were in some far-flung outpost, this would be an international incident. But with Mexico so close to the United States, and with Americans so inured to stories of violence just south of the Rio Grande, this may end up being little more than the outrage du jour. And what a tragedy it is that such violence is visited upon innocent Americans and Mexicans alike and the public just shrugs and accepts that that's just the way it is.

Email ThisBlogThis!Share to TwitterShare to FacebookShare to Pinterest
Labels: War on Drugs