Sexing down the auto shows?

If you're one of those in the K-blogosphere for whom car models at auto shows are a major positive when it comes to weighing the good and bad about life in Korea, you may have to start a new list of pros and cons.
As MSNBC reports, a new trend in South Korea is to sex-down the spokesmodels and smart-up the cars (and the spokesmodels). In other words, they want you to pay attention to the engines, not the headlights:

South Korean carmakers plan to cut down on the number of scantily clad models at the Seoul Motor Show, hoping people will look at the cars instead.

The show, which starts next month, usually attracts thousands of camera-wielding men snapping pictures of young women models in revealing costumes whose images quickly make their way to Web sites in the world's most-wired country.

"We would rather have the spectators' attention on our cars than the attractive ladies," said Hyundai Motor Company spokesman Jake Jang.

Hyundai, the world's sixth-largest car maker, will hire fewer models for the event. Its affiliate Kia will do the same.

Me, I have no problem with this. I've always found something a bit distasteful about criticism of how sexist the archetypal South Korean male supposedly is, when juxtaposed with sexist (if not outright misogynist) comments about the young women at the auto shows. (Another one that bothers my smugly superioristic self is non-Koreans using words like "shemale" when talking about Koreans' supposedly backward views towards transgender individuals.)
More to the point, it brings back the original "helping" aspect originally ascribed to the toumi (도우미) workers, back when it was considered a position for young women to aspire to. 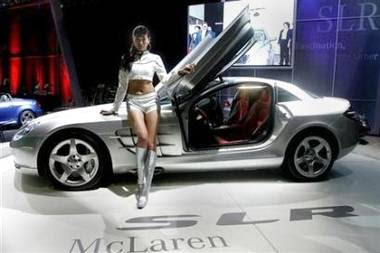 [above: "Do you come with the car?" has probably been heard so often by this car model that the words don't even register in her brain anymore.]
on March 25, 2007 No comments: