Peace in our time?

It is amazing how fast the promises are flying. I am a bit loath to say “how fast things are changing,” because the reality is that nothing has actually changed yet. But there is potential. North Korean leader Kim Jong-un is promising to denuclearize if he gets clear assurances from the United States that it won’t invade:


In a confidence-building gesture ahead of a proposed summit meeting with President Trump, a suddenly loquacious and conciliatory Mr. Kim also said he would invite experts and journalists from South Korea and the United States to watch the shutdown next month of his country’s only known underground nuclear test site.

In Washington, Trump officials spoke cautiously about the chances of reaching a deal and laid out a plan for the dismantling of the North’s nuclear program, perhaps over a two-year period.

That would be accompanied by a “full, complete, total disclosure of everything related to their nuclear program with a full international verification,” said John R. Bolton, Mr. Trump’s new national security adviser.

The apparent concessions from the youthful leader were widely welcomed as promising signs of ending the standoff on the Korean Peninsula, frozen in place since fighting in the Korean War ended 65 years ago.

This indeed is a game changer — if the promise and the denuclearization come to fruition. 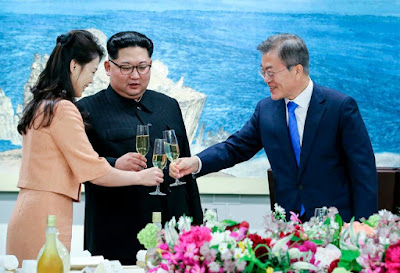 And let’s be realistic: a lot could go wrong to derail this. Trump could get unsound advice from the belligerent Bolton and say the wrong thing, which causes Pyongyang to doubt any assurances from Washington, for example. Or Beijing could decide Pyongyang is getting too cozy with Seoul, or Washington and Tokyo, and scuttle the whole thing. Or this could all be a ruse by Pyongyang to bide it’s time and/or squeeze concessions and cash out of Seoul or Washington before resuming nukes again.

But color me optimistic. Kim Jong-un has a number of reasons to try to make nice with Seoul and Washington, among them that it’s possible his nuclear program has collapsed on its own. Also, it appears to be no small number of people in the North Korean regime who are tired of living under the thumb of Beijing, who might see advantage in gaining favor and trading status and/or developmental aid with the United States and Japan.

As I’ve said before, the Switzerland-educated Kim Jong-un may be poised to make himself the Deng Xiaoping of North Korea, poised to rule for decades based on bringing improvements to the masses.

But make no mistake: the Democratic People’s Republic is anything but democratic or the people’s; the regime if not Kim Jong-un himself is responsible for unspeakable atrocities against the North Korean people. And it’s entirely possible that North Korean government may fall back on its despotic ways. For now, it behooves to the Moon administration in Seoul to keep their feet on the ground even if they are looking to the sky, and the Trump administration must do its homework so that they don’t miss any opportunities or misunderstand any actions.
on April 30, 2018 No comments: 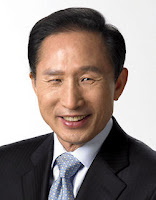 It’s the latest example that the Republic of Korea’s presidency is a nearly surefire way to end up behind bars or six feet under. Let’s recap:


It makes you wonder why anyone would want this job. (But we know the answer, and it’s the same reason so many get into hot water later.)

Is it too late to get the other Bolton instead?

As I wrote many times here at Monster Island and places such as the now-defunct* Marmot’s Hole, going back more than a decade, Ambassador Bolton is a dangerous combination of belligerent and ignorant, a chickenhawk who believes that giving North Korea “a bloody nose” will be the end-all-beat-all decisive action to halt tension on the Korean peninsula because he seems to not have thought through that Pyongyang would punch back, quite possibly in a big way. IOW, one-dimensional chess.

For better or for worse, those of us with homes in South Korea aren’t the only ones to take notice of how frightening this prospect is. As this New York Times op-ed piece notes, Ambassador Bolton’s call for taking out North Korea’s nuclear facilities before they are a more imminent threat may in fact be illegal:


John Bolton will assume office Monday with his first controversy as President Trump’s national security adviser awaiting him. Six weeks ago, he outlined his advocacy of an attack on North Korea in a Wall Street Journal op-ed titled “The Legal Case for Striking North Korea First.”

“Given the gaps in U.S. intelligence about North Korea,” he wrote, “we should not wait until the very last minute” to stage what he called a pre-emptive attack.

Mr. Bolton’s legal analysis is flawed and his strategic logic is dangerous. As he did before the 2003 Iraq war, he is obscuring the important distinction between preventive and pre-emptive attacks. Under rules of international law based on Daniel Webster’s interpretation of the Caroline case in 1837, a pre-emptive attack can be legal, but only if an adversary’s attack is imminent and unavoidable — when a need for self-defense is “instant” and “overwhelming.”

For example, if America had intelligence that North Korea had alerted military forces and was fueling long-range missiles on their launchpads or rolling out missile launcher vehicles, the United States could reasonably assume an attack was imminent and unavoidable and could legally launch a pre-emptive strike in what international lawyers call “anticipatory self-defense.”

For now, I’m safely in Honolulu, where attacks by North Korea remain — so far — hypothetical or imaginary, but if I were back in Seoul, I’d nearly be at the crapping-my-pants stage. It is a very realistic concern that Mr Bolton is giving Trump a green light to attack North Korea, and North Korea will attack back. The question is whether it will be a big reprisal or a small one. I may not be in Seoul, but most of what I own actually is, and I have family, friends, and two very nice tenants to worry about.