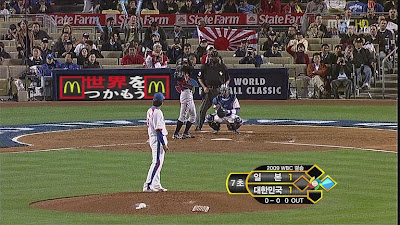 I don't think this putative screen capture from the World Baseball Classic championship game is a photoshopped picture, so take a look at the Japanese paraphernalia behind the umpire. That red circle is not representing the strike zone for the picture; that is a rendering of Imperial Japan's flag, the banner of the same Imperial Japan that wreaked havoc on mainland East Asia prior to 1945, resulting in the deaths of perhaps tens of millions.
Now it could perhaps be the flag of the Self-Defense Forces (SDF) but their flag has fewer rays and an irregular gold border. The maritime SDF looks like that but it's more clearly off-center than what's seen in the picture.
Seriously, what it up with that? If that really is the Imperial-era kyokujitsu-ki flag (旭日旗) someone's holding up, dude, what is wrong with you?
UPDATE:
Thanks to Brian in Chŏllanam-do, I discovered that the Chicago Cubs were using the Imperial Japan ensign in their advertising. The discussion here shows that some people see this as essentially the same as using a Nazi swastika in their promotions, while others seem to think it's no big deal, perhaps because they seem to think the Japanese flag with the rays emanating from it is the modern Japanese flag).

[above: 2008 advertisement focusing on Fukudome Kosuke, the Chicago Cubs' first player from Japan.]
on March 25, 2009