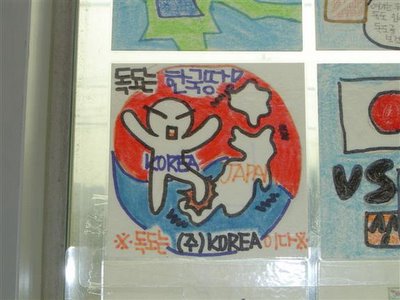 Reason is nectar.
Emotion is wine.
Anger is vinegar.
Hatred is acid.

The teachers and subway employees who are behind the creation and display (at Kyulhyŏn Station [귤현역; NAKL: Gyulhyeon] in Inchon) of these children's works about Tokto should be ashamed of themselves for trying to instill such animosity in young children.

People who would actively try to promote such hatred in impressionable young minds are simply not fit to be teachers.

ADDENDUM TO POST:
This update comes many months later, after the first five comments left below. Anyway, when I first heard about this, I made plans to go to Kyulhŏn Station to see the whole thing for myself, and perhaps lodge a complaint. But then came news that the display had been taken down a few weeks earlier than its scheduled "closing date." I called and asked, and I was told that there had been local complaints (i.e., people from the area had complained directly). I asked if foreigners had come to see the display, and I was told yes. There was no mention of the foreigners specifically being the ones to complain. It was more of a generic "people in the neighborhood," which one would assume to be primarily Koreans. Had it been primarily "foreigners" who had complained, I think that would have been stated.

At any rate, after looking into this some more and discussing it with a few people, I am almost certain that teachers of the far-leftist, neo-Marxist, pro-Pyongyang Korea Teachers Union, also known by their former Korean acronym Chonkyojo, were behind this. If you want to know who is teaching animosity in schools—not just against Japan but also against the United States, the Korean government, anyone perceived to be "too rich," free-market capitalism, etc.—this is your main culprit.

As a main part of the chinbo (literally "progressive," but some of the groups in this umbrella clearly distort that word's positive intent) movement, they are responsible for inculcating Korean children with pro-Pyongyang, anti-Seoul, class-conscious, anti-capitalist, anti-Western views. In schools where their leftist textbooks have not been authorized, the Chonkyojo teachers use Chonkyojo-approved "teachers guides" to supply the Cumings-esque viewpoint (after Bruce Cumings, the University of Chicago historian whose Pyongyang apologist pap is a staple of Korea's radical far left "thought").

Until just a few years ago, in fact, this radical labor union was outlawed in Korea (former President Kim Daejung legalized them as a way of breaking away from Korea's hard-line past), and mainstream educators distrust members for their far-leftist views.
Current President Roh Moohyun, who has stocked his cabinet with government ministers who are so far left you can't see them because of the curvature of the Earth, is trying to force private schools (40% of all schools) to accept local advisors on the school boards. This is nothing more than an invitation for Chonkyojo teachers to make their way onto the boards of even private, supposedly independent schools. Needless to say, the private schools haven't been taking this lying down.

One final note. The original poster who presented this display was very liberal in using the phrase "Fuck Japan!" in his explanations of what was being said in the various pictures. For those who don't read Korean, this might lead to an inaccurate impression of what the Korean words were saying in some cases. Often, the words accompanying the pictures were far milder than that bit of profanity would suggest.
...
on June 20, 2005