Over at the Marmot's Hole, Frogmouth, the ardent defender of the Korean side of the Tokto/Takeshima controversy, cited a memorandum on punishments the Japanese military authorities meted out against wayward Korean subjects in the early days of colonial rule.

The English-language notice mentions a place called Port Lazareff (aka Port Lazarev), which frankly I had never heard of (well, I might have encountered the name in an old book but neglected looking up what it was referring to). Back in the late 19th century, lots of East Asian ports, islands, and bodies of water had very European-sounding names that had little to do with what locals called them.
Liancourt Rocks, of course, is a prominent example for anyone studying Korean issues. Quelpart Island, which referred to Chejudo [Jeju-do], is another example, as is Dagelet Island, which was what Europeans once called Ullŭngdo [Ulleung-do], not terribly far from Tokto [Dokdo]. Port Arthur, site of an important battle site during the Russo-Japanese War, was what what we call Lüshunkou, China, at the southern tip of the Liaodong Peninsula. Port Hamilton was the name of the British fortification (held from 1885 to 1887) on the small island grouping of Kŏmundo [Geomun-do] off Korea's south coast, in the East China Sea. I could go on and on. 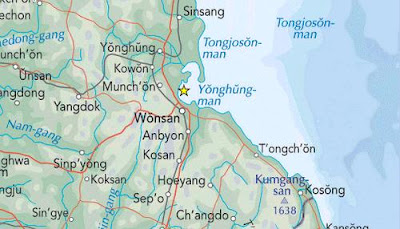 Anyhow, back to Port Lazareff. Having never heard of it (maybe), I looked it up. And what I found was a fascinating archive piece from August 2, 1886, in the New York Times, something worthy of the archives I used to post in the past (mostly from Time).
Besides the nonchalant way in which the London Times (from which the 1886 NYT article was originally printed) talks about foreign powers having rights to parts of Korea, one reason the article is fascinating is the polyglot way in which Korean place names are described. "Broughton's Bay" was (and sometimes still is) used to refer to Yŏnghŭng Bay [Yeongheung], where "Gensan" (Wonsan, North Korea) is located. A nearby island called Chotoku, almost certainly a Japanese name, is also mentioned, along with a town called Yonfun. There's also a Virginie Bay.
Such was the mishmash of names for things on "the Peninsula of Corea" in the 1880s. With so many nautical Europeans and Americans swinging by, oftentimes getting their information about Korea filtered through Japan, it's no wonder that one would end up with place names like Gensan instead of Wonsan or Virginie Bay for whatever Virgine Bay is now called. For something similar, take a look at this entry on Korea in the 1911 Encyclopedia Britannica. It lists not only the aforementioned place names, but also Port Shestakov, which I found was "located a third of the way down Korea's northern coast."
Anyway, here is the 1886 article in its entirety:
RUSSIA'S PORT LAZAREFF
From the London Times.
Port Lazareff, named after the Russian General who so much distinguished himself at the capture of Kars, and who died during the progress of the Turcoman campaign, is situated on the northern, or more strictly the easter, side, of the Peninsula of Corea. It lies in Yunghing, or Broughton's Bay, which was discovered by Capt. Broughton in 1797, and which contains, perhaps, more fine harbors than all the rest of the Corean coasts together. The bay is filled with numerous islets, of which Chotoku is considered the most important, and the flourishing port of Gensan, opened to external commerce in May, 1880, furnishes practical evidence that the advantages claimed for the whole of this gulf or bay by navigators are not fanciful or based on insufficient information. Port Lazareff itself is situated opposite to Gensan, and is east of the Corean town of Yonfun. It is also near the mouth of the Dungan River and west of Virginie Bay. Navigation is open at all seasons of the year, and the depth of the water as well as the highness of the tides furnishes additional facilities for making Port Lazareff, at the moment only a geographical term, the headquarters of Russia's Pacific squadron. In many of these particulars Vladivostock could not be excelled. but its insuperable drawback is that for several of the Winter months navigation is closed by the ice. For those curious as to the line of policy Russia has pursued in this matter, we may say that the necessary information is given succinctly in an article on "The Ports and Trade of Corea," which appeared in the Edinburgh Review last July. Port Lazareff, it should be stated, has the additional advantage of being situated in one of the most prosperous and well peopled provinces of Corea. The Russians are understood to base their right to seize Port Lazareff on account of our occupation of Port Hamilton, but the two cases are radically different. Port Lazareff is an integral part of the Corean kingdom. ITs occupation would be resented by the Japanese at Gensan and by the Chinese Government. Our own interests are such that we could not regard the event with indifference, and the very ease with which we could prevent it would be an additional reason for upholding the treaty rights of Corea. Thhose rights were not infringed by the British Government in occupying Port Hamilton—two rocky islets with only a few resident families of fishermen—for this step was taken after an express arrangement between the late Sir HArry Parkes and Li Hung Chang, and with the acquiescence of the Seoul Government. The two cases are, therefore, completely dissimilar.
on July 24, 2008