Pivot or no pivot?

If you’re following me on Twitter (and everybody should), you would have seen me post this PBS NewsHour story, that includes a picture of newly minted U.S. Secretary of State Mike Pompeo eagerly — and I mean with apparently great enthusiasm — shaking hands with a grinning not-so-newly-minted North Korean leader Kim Jong-un. 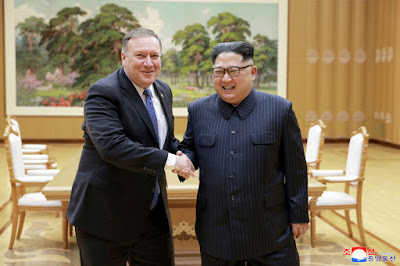 And then you would have read my tweet essentially saying that it may sound crazy, but I think it’s possible that what we are witnessing here may actually be North Korea willing and trying to make a pivot away from China and toward the United States and South Korea. Which would be epic, legendary, the stuff that changes history (and may potentially win one or two leaders a deserved Nobel Peace Prize if it comes with a resolution to the Korean War and peace on the Korean Peninsula, which it probably would).

I added that the coming days may present a golden opportunity for the US, South Korea, and even Japan, but that I’m not so sure President Trump — who utterly lacks knowledge of Northeast Asia, including why North Korea does what it does — is up to the task, though I hoped maybe Pompeo is. If anyone would know how to tap into Kim Jong-un’s Western upbringing (he was educated in Switzerland) and his possible desire to be the Deng Xiaoping of North Korea and pull his country out of the morass so that they’ll love him instead of fear him, it would be Pompeo (as long as he came with a bag of goodies, a very big bag).

And I was all set to crank out that post, when this happened: North Korea canceled talks with South Korea and threatened to cancel the upcoming historic sit-down between Trump and Kim Jong-un.

There could be so many reasons behind this, from North Korea’s fears that they’ll end up like Libya’s leadership (deposed and executed), to merely it being a hardline negotiating position. I’m hoping for the latter, but in case it’s also the former, we need John Bolton to start shutting his mouth. Like starting in 2005.

I’m still holding out for the possibility that a pivot could happen. North Korea relies on China for so many things, but at the same time resents that. Kim Jong-un may be tired of North Korea being China’s “little brother,” while reaching out economically to South Korea, the United States, Japan, and possibly Taiwan could offer a better future. There are (as far as I’m aware) no Chinese military bases in North Korea to worry about, and Pyongyang is experienced at sealing off its border to the PRC and Russia, so it could be done. The trick is getting North Korea to see how it benefits them.

And managing a pivot is something Trump can do that Obama would have had trouble doing. Not because he’s an excellent negotiator (in fact, such a deal would require the U.S. giving a lot of things to the North) but because Republicans in Congress will let it slide if dealing with a murderous regime (i.e., the Democratic People’s Republic of Korea, aka North Korea) means dropping sanctions, holding your nose, and giving them money or allowing U.S. corporations and individuals to do business there, whereas they would have screamed bloody murder at Obama had he tried the same.

So here’s hoping we’re at that moment in history where everything is lined up just nicely for North Korea to drop its guard and embrace the West. But first, gag Bolton and tie him up in a closet and take away Trump’s Twitter phone.