Japan's next heir? (This story is not what you think)

There has been a bit of buzz about the possibility that Japan might change its way of choosing the next emperor, allowing for the first time in (what's 2,006 minus 1,771?)... a very long time a woman to become empress. This would pave the way for Aiko (whom I like to call Aeja, to honor her Korean heritage).

But wait, that's not what this post is about, because all the talk that maybe the Imperial Household would be dragged kicking and screaming into the 20th century may be for nothing, because the wife of Crown Prince Naruhito's brother (Prince Naruhito) is pregnant at the age of 39.

Kiko already is the mother of two daughters, aged 14 and 11. If she produces a boy, and Crown Prince Naruhito's wife Masako is not able to produce a son, then guess who Aiko will lose her throne to?

To be honest, she'll probably be better off. 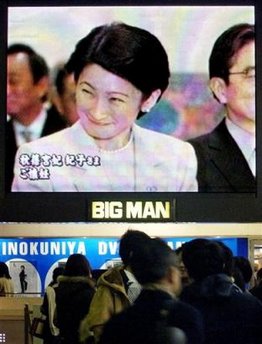 [photo: A large-screen television shows a beaming Princess Kiko. Judging by the English subtitle, she is apparently telling the Japanese press what a sizable and capable man her husband is.]
on February 08, 2006