Korea makes it to HuffPo's "most breathtaking photos" of 2013

Over at The Huffington Post, they have released their "52 Most Breathtaking Photos of the Year." 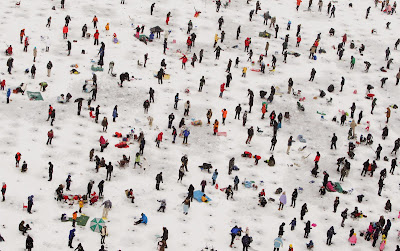 These are arranged chronologically (from January to December), presenting the "most breathtaking" for each week. The photo at #2 is of ice fishing in mountainous Kangwon-do Province's Hwach'ŏn-gun County. Here's the news text from January 5 to January 11:


Anglers cast lines through holes into a frozen river during an ice fishing competition at the Hwacheon Sancheoneo Ice Festival on January 5, 2013 in Hwacheon-gun, South Korea. The annual event attracts thousands of visitors and features a mountain trout ice fishing competition in which participants compete with tradition lures or with bare hands. (Chung Sung-Jun/Getty Images)

The 2014 festival is from January 4 until January 26, if you're interested in playing the Minnesotan. The Visit Korea link is here. I like the name in Korean (얼음나라 화천 산천어축제) a lot better: Hwachŏn's Country of Ice Salmon Festival (I think, even though the English says they're fishing for mountain trout).

I know that in Minnesota, where a lot of my relatives are from, it gets cold enough to sustain months of ice fishing and weeks of Garrison Keillor "News From Lake Wobegon" bits, but I'm not sure if it gets cold enough even in Kangwon-do (where the 2018 Winter Olympics are to be held) for so many people to be on such perforated ice. But I guess rescue photos would also be breathtaking. (I kid! This actually looks fun... Hawaii's "winters" have made me miss the Korean cold.) 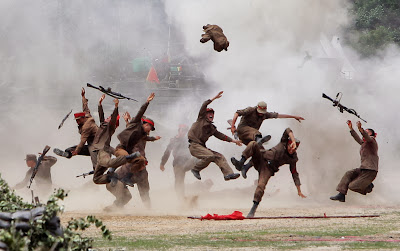 At #26, in the week of June 22 to June 28, we have South Korean soldiers in Ch'unch'ŏn dramatizing a major battle on the anniversary of the start of the Korean War. Here's the news text:

Of all the American cultural products to be imported to South Korea, I never expected Civil War reenactments to be one of them. This looks like a first-class effort, almost like a movie still. This, too, could be fun (but less so in the winter, when I would prefer to be ice fishing). 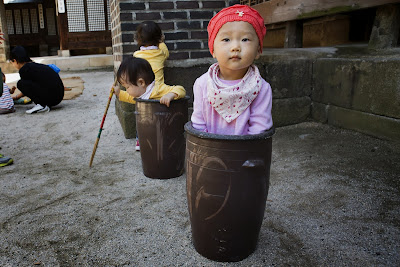 At #40, in the week of September 28 to October 4, which I think was Ch'usŏk, they have some cute kids. The news text explains:


Jung Ha-yoon, 2, appears to be stuck inside a ceramic container while playing with other children at the traditional sports square during the "Taste Korea! Korean Royal Cuisine Festival" held at Unhyeon Palace, also known as Unhyeongung Royal Residence, in Seoul, South Korea, on Tuesday, Oct. 1 2013. (Jacquelyn Martin / AP)

While I think it's nice that they're promoting public access to royal palaces like Unhyŏn-gung (which has a neat little tea house inside, if you're ever looking for a quiet way to spend the afternoon in downtown Seoul), this picture hearkens back to images I had in high school from reading Brave New World, with the alpha and beta humans maturing in "decanting bottles." But that's me. 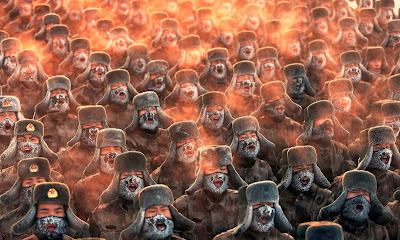 That's it for the ones from Korea. But for things I would consider indirectly Korea-related, above is one at #6 (February 2 to 8). It's of Chinese soldiers in the bitter cold, and it was the front-page photo HuffPo used for this story. My explanation of its Korea relatedness follows the news text:


A military regiment takes part in a morning exercise on January 29, 2013 in Heilongjiang Province of China. The temperature dipped to minus 30 degrees Celsius. (ChinaFotoPress / Getty Images)

Heilongjiang Province is in the border region where China encounters the North Korea-Russia border, with no small number of ethnic Koreans. But where this is relevant is that this would be one of the forces that would invade North Korea were Pyongyang to collapse or were Pyongyang to taking China's leases and purchases (e.g., ports and mines) back under North Korean control.

There are some other great photos there. I'll leave you with nuns and bikinis, from Brazil (#31, from July 27 to August 2): 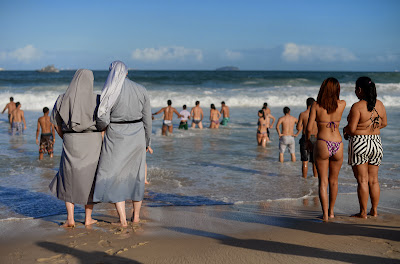