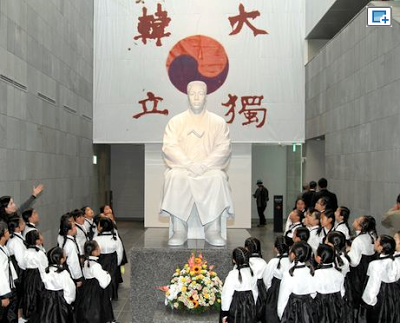 Don't expect to see worship of assassin An Chunggŭn (Siri wrote his name as "I'm chilling good") anytime soon, just because the daughter of South Korea's most pro-Japanese leader ever has been elected president herself.

Park’s request for the An memorial in Harbin, Heilongjiang province, was made over lunch with Chinese President Xi Jinping on June 28.

An killed Ito Hirobumi at Harbin station. He is considered a national hero in South Korea because he symbolizes the resistance to Japan’s 1910-45 colonial rule of the Korean Peninsula.

“I hope you will install such a memorial at Harbin station because he is a historical figure respected by the peoples of South Korea and China,” Park told Xi, according to a source in the South Korean president’s office.

Xi reportedly said he would instruct the relevant agencies to consider the matter.

Park’s proposal came after criticism erupted in South Korea over Prime Minister Shinzo Abe’s assertion that there is no clear definition of military aggression. The Japanese leader made that remark in the Diet during discussion on statements of apology for Japan’s military past.

In a May meeting with U.S. President Barack Obama, Park brought up the historical recognition issue and singled out Japan as a nation that had to face its past in the proper manner.

With the increase of anti-Japanese sentiment in South Korea, Park may also be trying to distance herself from her father, the late former President Park Chung-hee, who was considered pro-Japanese.

I know that my crusade — to curtail the near deification of this assassin who provided Japanese Imperial expansionists the excuse to annex Korea — will probably never succeed, but the last thing I want to see is for it to be a cause for bringing Chinese and South Korea together. (You can read more about my admittedly controversial views here, here, here, or even here.)