All those pot-smoking teachers have picked the wrong Korea 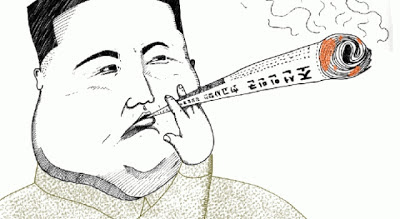 Although 4/15 is a national holiday in North Korea (Perpetual Forever Leader of Eternality Kim Ilsung's birthday), you'll have to forgive the locals if they don't start celebrating until 4/20.

As NK News reports, although the DPRK is coming down hard on drug use such as methamphetamine that is the scourge of many in East Asia and rural and suburban America, it seems that marijuana is not included in the list of illicit drugs. Not only that, the authors say, it is actually tolerated:


You might be surprised by what we’re about to say: the most tight-lipped, conservative and controlling country in the world is also a weed-smoker’s paradise. Despite the North Korean government’s deadly serious stance on the use and distribution of hard drugs like crystal meth (which has its own inauspicious legacy in the North), marijuana is reportedly neither classified illegal or in any way policed. The herb of the bohemian and free is not even considered a drug. As a result, it’s the discerning North Korean gentleman’s roll-up of choice, suggesting that for weed smokers at least, North Korea might just be paradise after all.

NK NEWS receives regular reports from visitors returning from North Korea, who tell us of marijuana plants growing freely along the roadsides, from northern port town Chongjin, right down to the streets of Pyongyang, where it is smoked freely and its sweet scent often catches your nostrils unannounced.

There is no taboo around pot smoking in the country – many North Koreans know the drug exists and have smoked it. In North Korea, the drug goes by the name of ip tambae or “leaf tobacco.” It is reported to be especially popular amongst young soldiers in the North Korean military – rather than getting hooked on tar & nicotine like their contemporaries in the West, they fraternize without fear of repercussion by lighting up king-sized doobies during down time on the military beat.

This actually is probably not very surprising to people who lived in Korea for very long, who've heard the stories of old halmŏni and harabŏji (i.e., grandmas and grandpas) growing and smoking up in the mountainsides back in the day.

Supposedly it wasn't until the Park Chunghee regime that South Korea, under pressure from the United States, started to crack down on the stuff. Now opposition to marijuana smoking is about where it used to be in the 1970s in the United States, and that's one reason why foreigners can see themselves getting lots of jail time and/or deportation if they're caught smoking or distributing the stuff (especially the latter).

But before you decide that it will be cheaper to move to North Korea than Oregon, note that things that Koreans on either side of the DMZ like to do in private are not always shared with visitors. My guess is that the North Koreans would kick you out of the country in a hurry, but you never know if they might first decide to give you few weeks' stay at the Pyongyang Palazzo.

(And just in case your brain is a bit weed-addled, I want my pothead friends and readers to understand that Pyongyang Palazzo means prison, which by all accounts is not a very nice place in North Korea.)

If the NK News story is correct, it would explain a lot of things. In particular, it would explain why so many North Koreans are in such dire straits and living such dismal lives, but they don't rise up to do anything about it.

That is probably part of the plan.