Will we see capital punishment carried out in South Korea again?

At ROK Drop, GI Korea mentioned a recent news story about a 25-year-old man who was convicted of brutally murdering his ex-girlfriend and her sister in Ulsan in 2012. The family cheered when the killer was handed down a death sentence.

The ROK Drop post posed the question: Will this sentence ever be carried out? Regular reader Leon LaPorte (probably not the Leon LaPorte) asked for odds, while John from Taejŏn (a regular commenter here as well) offered the following observation:

True that. And relevant to any discussion of a probability of the Ulsan murderer or any other person being executed in the Republic of Korea in the foreseeable future.

And what are those odds? Close to zero, but not zero.

Before we get started, you may want to read about my own ten-point opposition to the death penalty ("Sympathy for Mr Vengeful"), in South Korea or any other civilized country. Note, however, that my disapproval of the death penalty does not cloud my judgement on whether or not it will be practiced in the ROK again.

As in the US, where lately Korea's right (particularly the religious right) has been getting a lot of its political cues, demand for continued use of the death penalty is a red-meat issue designed to whip up support, with the added occasional benefit of eclipsing a need to discuss reform of an unfair judicial system. Remember when folks like Bill Clinton had to state their support for capital punishment to prove they weren't "soft on crime," a label frequently used to smear "liberals"?


In South Korea, there had been a move away from support of the death penalty, largely because South Koreans often look at post-war Europe as a civilized model and the practice was seen as the unseemly residue of past military regimes. Under Roman Catholic Kim Daejung (who escaped a death sentence himself) from 1998 to 2003 and leftist Roh Moohyun from 2003 to 2008, capital punishment was all but banned with little or no discussion (or fanfare).

Under Lee Myungbak from 2008 to 2013, there have been whispers and occasional shouts that at least some of the death sentences still being handed out should be enforced, that the Kim DJ moratorium should end. President-elect Park Geunhye, who takes office February 25, may feel a need to give in to that momentum, or even harness it herself. That makes the odds above zero, though it's not clear how much.

But President Park should be keenly aware how unseemly it will look if the daughter of the dictator who so abused the death penalty — who actually stands as a symbol of its abuse in South Korea — were to be the one who brings it back. Ms Park has tried to distance herself from her father's excesses while tying herself to the positive aspects of her legacy, and she surely must realize that capital punishment easily falls into the former.

To many South Koreans, the notion of the death penalty as it was practiced in South Korea in the past evokes images of Nazis like in the photo below... 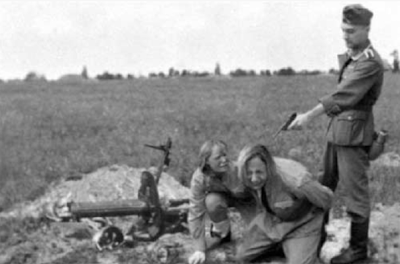 ... or the more recent images of Chinese citizens being tried and convicted and then hauled off to be shot in the head:

And that brings it back closer to zero from wherever it was. Still, a particularly egregious case could change the calculus, such that no one will really care if the dictator's daughter is the one now sending people to their death (if they seem to deserve it).

Tying this all back in with John from Taejŏn's point, I would hope people in support of the death penalty might consider point #6 at the aforementioned "Sympathy for Mr Vengeful" post.