Michelle Malkin: Psy does not speak for me Apparently Michelle Malkin believe that other people will think that she, an Asian-American, is automatically represented by the likes of Chinese actor and martial arts guy Jackie Chan and South Korean rapper Psy, because they're also Asian. I guess when you're a token representative of your race/ethnicity to a subculture made up of a bunch of people of the dominant racial group, that's a big risk.

Anyway, she wants to make it clear that Jackie Chan and Psy don't speak for her, though she herself presumes to speak for other Asian-Americans who, despite being loyal Americans, may have forebears or other relatives whose encounters with the United States weren't 100.0% wholly positive:


"Yankees" — especially those whose parents came to the United States from all parts of Asia seeking freedom from tyranny — should shun these exploitative peas in an anti-American pod. They don't speak for me.

I defer to right-wing pundits to let us know when seemingly innocuous acts are actually anti-American (like this). So what's the "exploitative" scoop on Jackie Chan? Well, he's a believer in the idea that Chinese shouldn't air their dirty laundry:


Last week, The Washington Post spotlighted a recent interview Chan did with Chinese TV in which he accused America of being "the most corrupt country in the world." The Hong Kong-born Chan also admitted proudly that he is a propagandist for the Communist Chinese government. He openly advised his fellow countrymen to speak with forked tongues when addressing foreign press: "We know our country has many problems. We (can) talk about it when the door is closed. To outsiders, (we should say) "our country is the best."

Turns out that behind the jovial cinematic persona, Chan is an unrepentant champion of authoritarian rule. Despite making a living as an entertainer and "humanitarian," Chan suffers a severe allergic reaction to freedom of speech and freedom of thought. In a separate interview last month with China's Southern People Weekly, he complained that Hong Kong had become a city of too many protests. "There should be regulations on what can and cannot be protested," Chan declared.

Earlier in 2009, Chan echoed Chinese Communist leaders in asserting that Chinese people "need to be controlled" because "if we are not being controlled, we'll just do what we want." God forbid!

Funny, though, that Ms Malkin is all up in arms over Mr Chan's "severe allergic reaction to freedom of speech and freedom of thought" when she doesn't afford the same courtesy to Psy, who a decade ago was one of the millions of people who were pissed off about the death of two middle school students at the hands of a negligently operated US military convoy, followed by then-President Roh Moohyun being arm-twisted into sending ROK troops to what was widely seen as a terribly executed and unjustifiable war in Iraq:


Will American consumers allow themselves to be punched in the gut by this trash-talking action star? If the embrace of Chan's new pal PSY is any indication, the answer is yes. The Korean "Gangnam Style" performer once urged listeners to "kill those (expletive deleted) Yankees ... kill their daughters, mothers, daughters-in-law and fathers."

Called out on the hate lyrics, he issued a hasty apology before performing for the president and his family last month. Instead of rejection, PSY continues to be courted by the American entertainment industry. He'll be working with Justin Bieber's producer and will make an appearance in a high-profile ad for pistachios during the Super Bowl.

Anti-American Psy getting a pistachio commercial?! That's just nuts. (And by the way, one reason for "anti-American" sentiment is mimicry.)

Seriously, though, the contention that Psy is anti-American and not just opposed to American soldiers running over thirteen-year-olds is a little shaky. But I guess Ms Malkin had to write about something today. And if you're lacking material, it's convenient to dig into the "Trust me, I'm one of the good Asians" grab bag.

Ah, I shouldn't bash Michelle Malkin, but it really is so much fun. The truth is, I actually agree with her that it's a bit shady that Jackie Chan is shilling for the Chinese government (and here's how I feel about the Chinese government). I do understand the common Asian philosophy of keeping domestic problems domestic and obscuring from outside view. (I have great skepticism of the Chinese Communist Party's intent at trying to keep domestic issues from hitting the international media, which is an abuse of this cultural behavior.)

The same thing is still quite common among South Koreans, many of whom paint a rosy or exaggeratedly hyperbolic picture of stuff in the ROK while amongst themselves engaging in "Korea-bashing" so nasty that you'd think they were English teachers.

Ms Malkin, I'm guessing, is a bit ignorant of that cultural aspect, and that's compounded by her apparent belief that the Chinese should do things the American way because it's the right way. 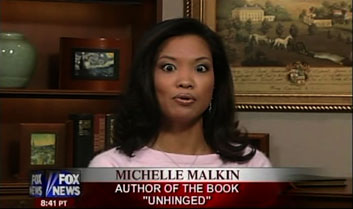