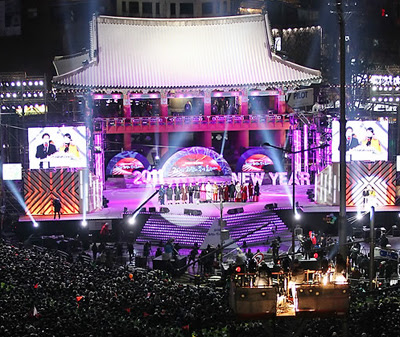 Back in Korea, my apartment is close to Seoul Station, and I miss walking out in the bitter cold to Poshin'gak Pavilion (downtown, a couple miles away) and listening to the bell being rung thirty-three times. Yeah, it's loud and smoky because of the traditional fireworks, but it's kinda sorta spiritual at the same time. 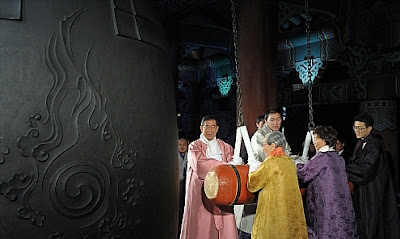 Instead, this year I headed again to Waikiki, where I got a buttful of sand sitting on the beach waiting for the off-shore fireworks display, after which I and some school friends headed for Denny's, something of a tradition (though "M," who started it, was in Japan herself).

And now that it's 2013, which in leet spells Joie, which is French for joy, which indicates... ah, I'm going nowhere with this. Um, anyhoo, it appears that the one-hit wonder that is Psy in America is still keepin' keepin' on. Here's "Gangnam Style" promoting Betty White's program (she herself knows a thing or two about keepin' keepin' on).

Anyway, Happy New Year and all that, now get back to work.