Echoes of the Songsu-daegyo Bridge disaster 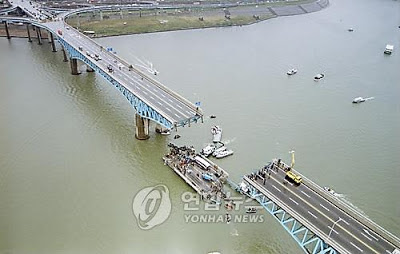 I was living in Seoul in October 1994 when a section of Sŏngsu-daegyo Bridge (성수대교), one of a dozen or so "grand" bridges that cross the Han River, broke loose and collapsed into the chilly waters below. While there were a number of fatalities, there were also quite a few people who survived (wearing seat belts helped).

One such story was that of a group of police officers who were on their way back from having received commendation medals for dedication to duty or some such. When they ended up in the water, they immediately went about rescuing other drivers and passengers who'd ended up in the water with them.

The collapse of Sŏngsu-daegyo was part of that one-two punch — including the collapse of Sampoong Department Store the following June — that forced a rethinking of Korea's rapid construction projects and a systemic lack of oversight for those that were already completed. For weeks, the newspapers carried reports of how many bridges and buildings were considered unstable or in dire need of repair, and the government went about remedying that in a major undertaking. Too little, too late, for those who died in those two disasters, but things were markedly improved for everyone else. 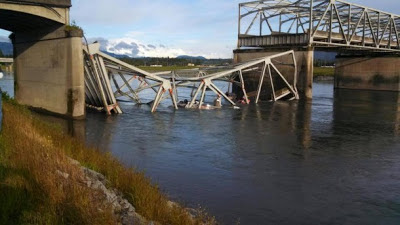 I was reminded of that situation when I heard today about the sudden collapse of a section of Interstate-5 in Washington State, which caused several drivers to plunge into the icy waters of the Skagit River. Thankfully no one was killed, but I was struck at how blasé the reporting was. 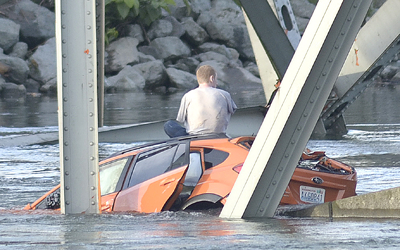 In Korea, this led to a national dialogue about how the Han River Miracle had been sped up to the point of being a curse, but there did not seem to be the same outcry in the United States.

The Skagit River bridge collapse is not the first such incident in recent memory. Thirteen people were killed in 2007 when a bridge on Interstate-35 crossing the Mississippi River in Minneapolis collapsed.

At the time, reports came out about how much infrastructure was in disrepair and in need of mending, retrofitting, or wholesale replacement:


More than 26%, or one in four, of the nation’s bridges are either structurally deficient or functionally obsolete. While some progress has been made in recent years to reduce the number of deficient and obsolete bridges in rural areas, the number in urban areas is rising. A $17 billion annual investment is needed to substantially improve current bridge conditions. Currently, only $10.5 billion is spent annually on the construction and maintenance of bridges.

But it was as if all the discussion dissipated into the ether when the next news cycle came around. The difference between the USA and the ROK is even starker when one considers that such "shovel-ready" projects were on the agenda as part of President Barack Obama's stimulus package so roundly derided and ridiculed by his Republican opponents.

If today's bridge collapse is a second wake-up call, I wonder if we'll again hit the snooze button.