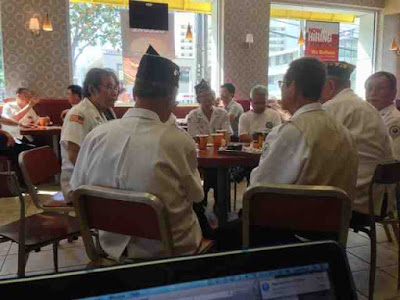 I had a chance to run into these guys while catching some breakfast at the McDonald's on Keeaumoku Street, across from several Korean restaurants, markets, and shops in a district fondly referred to as "Korea-moku." If you ever want to encounter Korean folks in a largely Korean neighborhood, head for the McD's.

It was a gathering of about a dozen members of the local Korean War Veterans Association (KWVA). As best I could tell, they were veterans of the ROK military but now mostly US citizens here in Hawaii. The Aloha State, going back to its territorial days, has long had a close connection with Korea, welcoming the first Korean immigrants to the US over a hundred years ago, being home to the fledgling independence movement during the dark days of colonial rule by Imperial Japan, and serving as a place of exile for South Korea's first president, Syngman Rhee.

Anyway, as I often try to do with war vets, particularly Korean War veterans, I went up to them (as they were leaving) and thanked them for their service. Having lived over a third of my life in Seoul, I told them, I'm especially grateful.

But to all on this Memorial Day weekend, thanks to all those who served and sacrificed, and especially to those who didn't make it, requeiscant in pace.