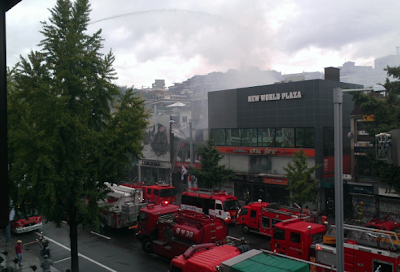 The details are still a bit sketchy, but it appears from this 10Mag.com piece that a decent-sized block of shops (and restaurants?) in Itaewon about half a dozen buildings to the west of the iconic Hamilton Hotel has burned to the ground:


Nearly a block of Itaewon near the Hamilton Hotel caught fire earlier this morning at approximately 7:15 a.m. As of 9:00 a.m., the fire appeared to have been extinguished and investigations are currently underway to determine the cause of the fire. There have also been no reports of injuries. Currently, the area between Itaewon station and the entrance to the main strip (Noksapyeong station direction) has been closed off and neither automobiles or buses are being allowed through.

I'm not sure how deep that fire was, but on the side street directly behind there (which runs behind Hamilton Hotel as well) there's a whole slew of bars and eateries that are a key part of the Itaewon rejuvenation (heck, the hipster renaissance of Yongsan altogether). While my first thought is that I praythat no one has gotten injured or killed, I'm also hoping the restaurant row was unscathed. We'll have to check 10Mag.com and the English-language dailies for more details tomorrow.

One can't help but look at this picture and wonder about the parking situation in Itaewon's back streets might have affected the firefighters' response. Judging from the pictures, most of them are along the main drag, spraying water across the non-burning structures so that it will fall downward onto the burning buildings. Was this because parking regulation violators had their cars along the side of the streets so that the fire trucks and other emergency vehicles couldn't approach? This is a perennial problem, but one that could be dealt with far more effectively.