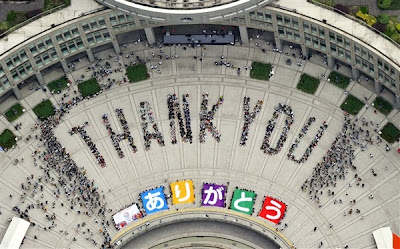 A lot of Japanese are quite ecstatic, now that Tokyo has been chosen over Madrid and Istanbul to host the 2020 Summer Olympics. It will have been fifty-four years since Japan last hosted the summer games in 1964 (but only twenty-two years since they hosted the 1998 Nagano Winter Olympiad).

Tokyo was considered the "safe choice" to host the games, since Turkey has the civil war going on next door in Syria and Spain is going through considerable economic difficulties. Japan's Prime Minister gave assurances that the still on-going Fukushima nuclear disaster will not pose safety concerns.

In fact, I think that the Tohoku earthquake and tsunami provided a pretext to award Japan the games. I don't mean that in a disparaging or condescending way: The Olympics are often awarded to encourage or reward worthwhile goals (both Japan and South Korea were awarded the games in part to highlight their respective post-war recoveries).

Besides concerns over radiation, one other point going against Japan would have been the old formula of continental rotation, where IOC members tended to eschew awarding the games to a country in the same continent as the previous games; since South Korea is hosting the 2018 Winter Olympics, it would be a tougher sell for next-door Japan to get the games two years later. But this trend was bucked when Russia (in Europe) was awarded the games immediately after Britain (also Europe).

I'm quite happy for Japan. This is a shot-in-the-arm needed for a proud but economically, demographically, and geopolitically beleaguered country, and I hope it provides the psychological boost they so want and need. The New York Times had the same idea:


Winning the Games also appeared to affirm Abe’s efforts to restore Japan’s confidence at a time when it has appeared increasingly eclipsed by neighboring China.

“Japan has seemed to be overshadowed by the rise of China and other developing nations,” said Harumi Arima, an independent political analyst. “These Olympics will give Japanese a chance to feel reborn, to feel for themselves that Japan can still be vibrant.”

Congratulations, Tokyoites and Japanese. I look forward to some very cool Games in seven years.