I guess it's the puke brown that's so slimming 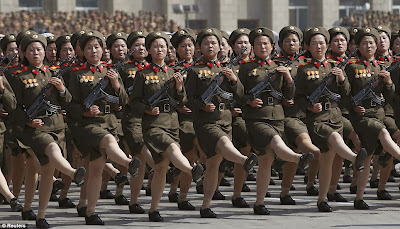 Meanwhile, the same Huffington Post has a piece condemning fashion magazine Elle for highlighting North Korea as an example of military chic:


What were they thinking?

Someone, somewhere in the depths of luxury magazine Elle thought it was a good idea to feature “North Korea chic” in September’s edition of the magazine (the page was subsequently replaced).

“Some iteration of the military trend stomps the runways every few seasons,” the article purred. “This time, it's edgier, even dangerous, with sharp buckles and clasps and take-no-prisoners tailoring.” Dangerous indeed for those actually in North Korea and subject to being executed for simply watching a foreign video. Or for those beaten to death.

It didn't take long for the world to render its judgement – outrage on social media condemned Elle for its breathtaking ignorance and insensitivity.


The magazine's mea culpa quickly followed: We regret the reference to North Korea in our post on the season’s military trend, and have removed the image. We apologize to those we offended. It wrote on its website.

It’s worth pausing to consider where the outrage over “North Korea Chic” stems from.

Human rights activists become used to hearing distressing stories of cruelty and brutality against the powerless and the innocent. It is the price we pay for helping to bear witness and demand justice.

But even for the more hardened amongst us, North Korea, provides some of the worst and most gut-wrenching stories imaginable: torture, starvation of children, beatings, random killings, forced labor in brutal camps.

When most people get their news and "information" about North Korea from late-night comedians making fun of Tub Dynasty (and I'm directing this more at Jay Leno and David Letterman), it's no wonder there's a disconnect between North Korea and the horrors committed there.