While reading up on this story and looking at de rigueur images of North Korean militarians goose-stepping through Pyongyang, something important occurred to me: A well-coordinated parade could take over the whole damn country. 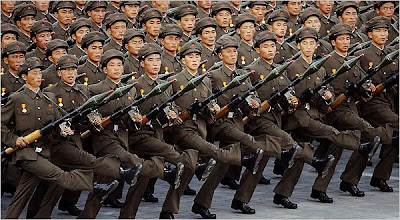 Nobody would ever expect it since—sh¡t!—the paraders are always walking past crucial government buildings with grenade launchers, tanks, machine guns, and giant phallic-shaped missiles.
"We thought they were just practicing!" would be the famous last words of some such high-ranking member of the military junta before he's strung up*.
[Post headline inspired by this song by My Chemical Romance, who themselves once took an entire country by storm (and whose name may have been inspired by North Korea's methamphetamine-trafficking efforts to gain hard currency).]
* I don't condone stringing people up.
on September 10, 2008