We're not out of the woods yet 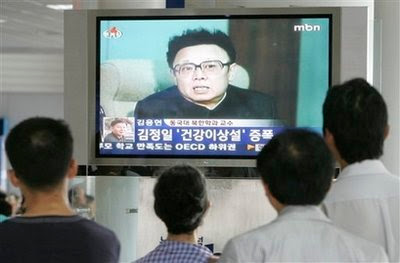 
With recent news and speculation about North Korea's Dear Leader Kim Jong-il being in ill health and possibly even near death, it should be no surprise that there is so much media focus on what is going on in Pyongyang and what it might mean for the future of the Korean peninsula and Northeast Asia.

So, as Korea Economic Review writer Tom Coyner put it it, "we can all breathe easier" at news of the South Korean intelligence report that KJI is recovering from surgery following a cerebral hemorrhage related to a stroke. KJI not dying is good because "no one is adequately prepared for the chap's demise and its ensuing consequences."
True, that. But I would advise that we are not out of the woods just yet. If you've ever known someone close to you who has had a stroke, especially a significant one, you may have noticed a marked change in their personality and even their behavior during and after their recovery.
It is not uncommon for people to have experienced wide personality changes. Well, "changes" is not as accurate as, well, amplifications. What is widely reported (and my own personal experience with this supports) is that entire parts of a stroke victim's personality can be largely wiped out, depending on where and to what extent the brain is damaged.
Some people who had long been largely cantankerous and difficult, for example, can become good-natured, cooperative, and congenial. It is as if the contentious part of their personality has been stripped away, leaving the amiable parts of their personality that were always there but were often overshadowed by their more argumentative traits. This very thing happened following the stroke of someone close to me.
On the other hand, the opposite can happen as well. The friendly and acquiescent traits that may even dominate a personality can also disappear, with the stroke victim left as a bitter and even angry person that is difficult to work with.

[UPDATE: A note about strokes. I wish to admonish that being a stroke victim is not the same as being in bad health from, say, cancer. Having suffered from a stroke is like having been shot with a bullet: If you survive the injury, the same stroke can't keep trying to kill you just like the same bullet doesn't come back to get you (except for that nasty bullet that shot JFK several times). You are likely at higher risk of a future stroke, but once you're out of the woods with the original stroke, it can't come back and get you, so once you've survived its effects then you only need worry about the next one coming. Like with a bullet wound, your impairment from the stroke is not something that gets worse over time (except insofar as lack of use of limbs or the brain may lead to atrophy).No doubt the Dear Leader probably is imbibing more Coumadin than cognac these days, lest he get another stroke that could off him completely.]

So our question is a two-parter: Will this happen to Kim Jong-il? And if it does, which direction will he go? Actually, it's a three-parter: And what does this mean for North Korean governance and how it deals with the outside world?
Oh, wouldn't it be wonderful if KJI's stroke turned him into a kitty cat and he dismantled his government's systematic vice-like grip, thus ending a reign of terror? All the political prisoners could be freed and North Korea could open up to its neighbors and tensions would drop like Lehmen Brothers stock when the Korea Development Bank decides not to back them.
Or... KJI could turn into a completely irrational and paranoid tyrant whose dangerous acts threaten to ignite a volatile Northeast Asia. I mean, more so than before.
No, Mr Coyner, we are not out of the woods yet.
on September 11, 2008