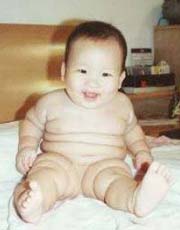 Facing criticism for being the last hold-out not to back out of sponsoring MBC's controversial exposé on Dr. Hwang Woosuk's cloning breakthroughs, Michelin Tires is trying to reach out to its Korean consumers with the introduction of a new, Korea-friendly spokeslogo: the
Michelin Baby [left].

In a massive hunt of the type usually reserved for the search for a new Dalai Lama, Michelin's French headquarters looked far and wide for an obese Korean baby with folds of fat that were precisely matched to the French company's famous cartoon logo [below]. 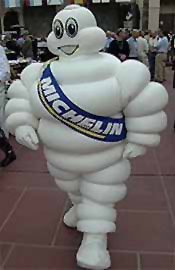 "There was no shortage of overweight babies in Korea," said a Michelin Korea representative, identified only by her family name Kim, "given how mothers practically force-feed their children pizza and Big Macs from the moment they leave the maternity ward. But we needed one with just the right tire-like curves up and down its body."

It is hoped that the baby's cuteness, plus the fact that the French tiremaker will use a Korean as their global representative, will make uber-nationalistic Korean netizens forget that Michelin was willing to sponsor a program that aimed to bring down a world-renowned Korean icon.

Initially, Michelin had been spared the political fall-out that might come from sticking to one's principles, until outraged Netizens had wrongly spread word that Michelin was an American company, confused as they were by those pesky English-language Michelin Guides and the fact that every other dogdam fucking globo-corp is a job-destroying, rainforest-depleting, people-exploiting, corruption-causing American company. You know, like BP, Siemens, NEC, Daimler, Haier, Lonely Planet, Tesco, and Carrefour.

I must admit that prior to the MBC program hubbub, I didn't even realize Michelin was a French company. I, too, had always assumed that the Michelin Man, with his spare tire, represented the typical American who spent too much time behind the wheel, sipping Coca-Cola while munching on Doritos and donuts, with which he had become one.

I should have been clued in by the fact that back in conservative Orange County, California, Michelin products were being referred to as "Freedom Tires."
on December 03, 2005