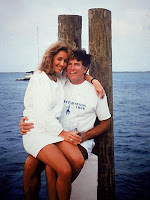 Well, it's official, despite my pleas to the contrary (see here and here), former Godfather Pizza CEO Herman Cain's presidential campaign is now sleeping with the fishes.

It looks like Herman Cain has been Gary Harted. Remember Gary Hart? He was the promising presidential candidate with even promisinger hair whose political aspirations were torn asunder after the press got hold of a racy (by 1980s Reagan-era standards) picture of him with Donna Rice (a then nobody who now heads an anti-porn organization) on a boat called, appropriately, Monkey Business.


Like Mr Cain, Mr Hart sort of taunted the media to come after him. Well, Mr Cain actually just said there were no true allegations against him, but then Ms Ginger White (who appears to be neither) came along and mentioned her alleged thirteen-year affair. Bill Clinton was able to survive that, and I'd hoped Cain would have been, too, but his campaign is now suspended and it looks like he's out.