UPDATED: Seoul Ministry of Education to phase out native English speakers by 2014

And replace them with robots. Or Korean non-native English teachers. Same-same. (I kid! I kid! I kid because I love... to kid!)

Needless to say, this is getting a lot of coverage in the K-blogosphere.

If this goes through (and don't expect for a minute it's a done deal), it might mean the end of cushy MOE jobs in the schools, but it might also mean a concurrent rise in demand at the hagwon level, as students (and their parents) look for a crutch (i.e., native teachers) now that that security blanket has been ripped away from them.

And of course, there's always employment in the provinces.

UPDATE:
The Marmot's Hole has a long discussion going on about this. Brian in Chŏllanamdo has a lengthy post that has links to other posts, though I think he puts too much blame on the Korean side of things and seems to lay none of this at the feet of the native English-speaking teachers who (from my experience in talking with some about this) often lack drive or interest or ability to work with their higher-ups to make their presence more effective, or even saw any responsibility to do so (e.g., "I get paid to teach and I teach, end of story," "I don't speak Korean so why should I go to teachers' meetings?").

I addressed some of that in my "epic rant" on English teachers from 2009.

UPDATE 2:
Asiapundits also has a good article worth reading (he uses the word "sacked" to refer to someone not getting their year-long contract renewed for another year). I left his comment there.


I certainly would agree that the administrators and schools deserve much of the blame, but the crop of teachers was a mix of highly qualified and motivated along with get-it-done-and-go-home or worse. A crapshoot, really, and that meant it would be difficult to impossible to consistently rely on the teacher supply to effect a better system.

They need to start over, get good input from teachers who actually care and who are willing to look introspectively at their side of the equation, get the same from KoKo teachers and administrators who will do the same, and rebuild. The demand, and hopefully the money, will be back.

By the way, that "little geniuses" photo you posted... the person who took it, presumably that 6th-grade child's teacher, has done some very serious privacy violations by sticking up a picture of the poor girl's work with her name attached. In fact, in some way this goes to what I'm saying: a Korean teacher could easily be reprimanded and possibly fired for such a breach, which they are trained to know not to do, but the foreign hires are on the fringes and (a) are not trained in such issues and (b) sometimes seem to lack common sense about them.

Seriously, what teacher would think it's okay to put up in a Flickr feed a child's test paper for the purpose of mockery, complete with her name?!

The latter part refers to the picture below, which I took the trouble to redact. 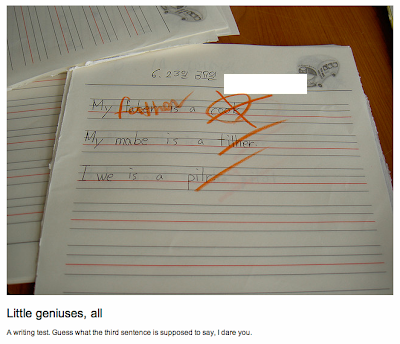 Email ThisBlogThis!Share to TwitterShare to FacebookShare to Pinterest
Labels: English teaching in Korea