They should have done this years ago

To mark the 1000th weekly protest in front of the Japanese (which, by my calculations, would mean they started in 1992, which sounds about right), supporters of the former Comfort Women (위안부, 慰安婦) have erected a simple statue to be a constant reminder to the Japanese government officials of this horrific thing that the victims cannot forget and which the Japanese right-wing would like to ignore or even deny. (The BBC also has the story.) 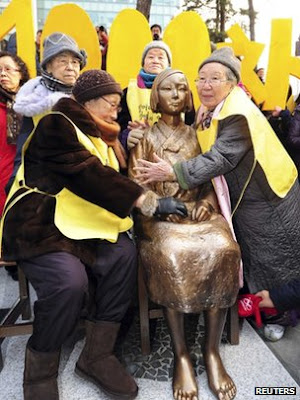 The statue is very simple. It depicts a young Korean girl in traditional Korean clothing, an everyday hanbok. She is dressed as these women might have been around seven decades ago when they were kidnapped, forced, duped, or otherwise coerced into work that turned out to be sex slavery on the front lines of the Pacific War.

She is depicted as a few years younger than many of them were when they were taken. For some, she is about the same age.

Frankly, this is brilliant. A simple statue that is a patient, ever-present, never-forgetting reminder. The surviving Comfort Women are in their eighties and nineties, and the Japanese government's strategy has been to just wait for them to die so the problem will go away.

Of course, the issue is not a simple one. There are questions as to whether the normalization treaty — which none of the women signed, of course — dismissed these women's legal claims. There's also questions as to whether the South Korean government of the Park Chunghee era, which took the bulk of loans and grants Japan offered and invested it in the development of the nation, owes them money as well.

There's also the question of whether any official thing that happened before the 1990s can be taken as compensation for the former Comfort Women, given that up to that point Tokyo had been vehemently denying any official involvement in the mobilization of these sex slaves.

But ultimately, the statue is not about that. Because even with a generous compensation package and a heart-felt expression of absolute apology (one that is not followed by right-wingers going "but but but"), this horrific action must be remembered. Forget lawyers and government accountants and political wranglers; it simply should not be allowed to die along with its victims.