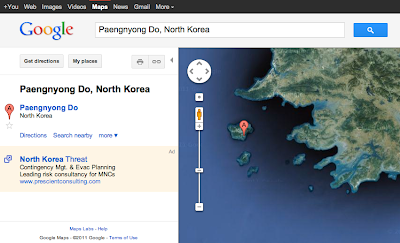 Or at least, that's what Google Maps would have you believe.

So I was looking for an aerial view of Paengnyŏng-do the other day. That's one of the Sŏhae-odo (서해5도), the so-called "Five Islands of the West Sea" which are technically a part of the City of Inch'ŏn (인천광역시) but hug the coast of North Korea. 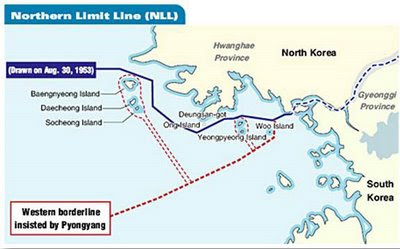 The Northern Limit Line (or NLL, the blue line above), which has formed the de facto maritime border between the ROK and DPRK since the Korean War armistice in 1953, is drawn in such a way that these islands form what would be a "natural" maritime border, one that follows the universally accepted principle of equidistance from populated land on the North Korean and South Korean sides.

The North Koreans, however, insist on the red line in the graphic. It ignores South Korea's Five Islands of the West Sea and runs equidistant from the mainland, with corridors South Korea can use to access its islands (and fish, presumably). It has become a very contentious issue lately, and North Korea has used it as a pretext to attack Yŏnpyŏng-do, ostensibly to sink the Ch'ŏnan, and engage in other sea battles out there.

Note that these islands are not disputed territory (former US Ambassador to South Korea Donald Gregg's words notwithstanding), and they were ROK-held even before the Korean War (the islands and the Ongjin Peninsula just above them are south of the 38°N line (the Thirty-eighth Parallel) that was Korea's Mason-Dixon Line (the KNTO should put a sign up like that: "Welcome to 38-Line! It's Mason-dixon Line of Korea!" including those capitalization and article errors).

And so that makes it quite odd that Google Maps would list this key territory (one that makes Inchon a very long city, though not as long as Honolulu) as North Korean. You see, as I typed P-a-e-n-g-n-y-o-n-g, a list with various options for my search would pop up, each selection getting more precise and specific as I went along. Finally, Google Maps offered "Paengnyong Do North Korea." There was no biased input on my part.

Interestingly, though, if I use the Revised Romanization and type Baengnyeong (the Paengnyong spelling is based on McCune-Reischauer), a proper South Korean address appears. Hmm...

Google Maps doesn't list Yonpyong-do, but asks if you are looking for Yeonpyeong Do, which it lists as in South Korea. However, check out the list if you type in Y-e-o-n-p-y-e-o-n-g and see what pops up:

Yup. Check out number four. That "Yeonpyeong-ri" is the principal village on Yŏnpyŏng-do Island, and Google Maps has it listed as North Korean territory. Below is visual verification. 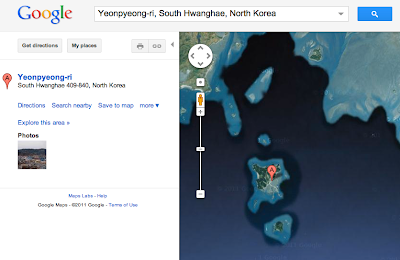 This is very sloppy work on the part of Google. What's next? Saying Calexico is part of Mexico just because they rhyme? (Though frankly, they can have it.)

Mapapropisms can happen to anyone, even some big names in media. The BBC apparently sent a drunken Mancunian out on a dinghy to redraw the NLL, and the Wall Street Journal ceded the US territory of Saipan to South Korea. Sloppy, sloppy, sloppy.

But don't worry. I'm not going to go all VANK on Google (although I wouldn't rule out VANK going all VANK, since that's what they do). But it does make me wonder: Can I now no longer trust the accuracy of what I find when I search on the Google?