It's a sin of sorts to like M*A*S*H, but I willfully ignore the blunders of the first season or two (when they actually referred to Korea as being in Southeast Asia, as the show was an allegory for the Vietnam War) because this program, one of the most popular television series of all time, made the Forgotten War not so forgotten. 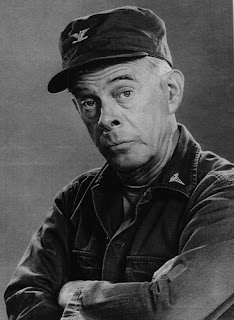 Anyway, Harry Morgan, who played many roles in his life (including an iconic run on Dragnet) but is best known as Colonel Potter, died this morning, just a few years and change shy of his own centennial.


But to many fans he was first and foremost Col. Sherman T. Potter, commander of the 4077th Mobile Army Surgical Hospital unit in Korea. With a wry smile, flat voice and sharp humor, Mr. Morgan played Colonel Potter from 1975 to 1983, when “M*A*S*H” went off the air. He replaced McLean Stevenson , who had quit the series, moving into the role on the strength of his performance as a crazed major general in an early episode.

In an interview for the Archive of American Television, Mr. Morgan said of his “M*A*S*H” character: “He was firm. He was a good officer and he had a good sense of humor. I think it’s the best part I ever had.”

Colonel Potter’s office had several personal touches. The picture on his desk was of Mr. Morgan’s wife, Eileen Detchon. To relax, the colonel liked to paint and look after his horse, Sophie — a sort of inside joke, since the real Harry Morgan raised quarter horses on a ranch in Santa Rosa. Sophie, to whom Colonel Potter says goodbye in the final episode, was Mr. Morgan’s own horse.

In 1980 his Colonel Potter earned him an Emmy Award as best supporting actor in a comedy series. During the shooting of the final episode, he was asked about his feelings. “Sadness and an aching heart,” he replied.

When I was a kid, M*A*S*H reruns were on every afternoon, usually in order but it didn't always matter. Each episode stood on its own, but there was an on-going storyline of sorts. It was a bit odd that a war-themed series would have a laugh track, but it seemed to be used much less in later seasons, when the episodes often tackled much more serious issues than before.

I saw David Ogden Stiers (Dr Charles Winchester) perform in a play once, which impressed me a great deal — in part because he could seriously spit — but by far my favorite character was Hawkeye Pierce who just seemed to be evolving in an interesting way.

Still, all the characters, whether the originals or their replacements, brought something to the table on that show, which ran for eleven years, over three times longer than the actual Korean War. Of course, the actual Korean War was on 24/7 and didn't go into reruns for six months of the year. Although a lot of the action did seem like a repeat.

And on the subject of M*A*S*H, read up on a connection between that show and CSI.