Prosecutors want their money back from former President Chun

In the United States, a president is deemed to have had a successful administration if the economy doesn't tank, a war he (or his predecessor) started doesn't turn into a quagmire of lost lives and treasure, and/or he passes some major game-changing legislation. (I will go back and edit this post to be gender-inclusive when our first female president ends her term.)

In South Korea, a president is deemed to have had a successful administration if he or she can avoid arrest.

Yesterday's big news was about prosecutors raiding the home of former President Chun Doo-hwan, who amassed a huge slush fund during his eight years of rule.


State prosecutors equipped with metal detectors raided the Seoul residence of former President Chun Doo-hwan on Tuesday in a search for assets. Mr. Chun, the former military dictator, owes South Korea 167.5 billion won, or $150 million, in fines but claims to be broke.

In a Supreme Court court ruling in 1997, Mr. Chun, now 82, was ordered to return to the state 220 billion won he had illegally accumulated through bribery from big businesses during his eight and a half years in power in the 1980s. He has so far paid only a quarter of the amount. In his last payment, he handed in $2,680 he said he had collected as a lecture fee.

Mr. Chun has rarely appeared in public since he stepped down in 1988 and entered a Buddhist monastery. In the 1997 verdict, he was also convicted of sedition for his role in the 1979 military coup that brought him to power and a 1980 military crackdown that left hundreds of people dead in the southwestern city of Kwangju. He initially was sentenced to death, but the penalty was reduced to a life imprisonment. He was later pardoned and freed.

Having lived in Korea off and on since I was a teenager, I've been around to remember pretty much most of this, including the two generals-turned-president (one of them democratically elected, by the way) getting the death penalty (more about that here) only to be pardoned and released. 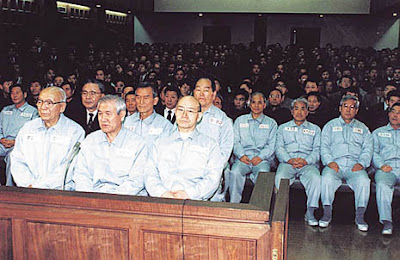 Indeed, it seemed like former presidents getting into hot water was de rigueur, with Mr Chun's friend and deputy Roh Taewoo following him to the Blue House and then the Big House, and the troubles faced by two of The Three Kims (former opposition leader turned ruling party president Kim Youngsam and then perpetual opposition candidate Kim Daejung) and then the scandal that led to Roh Moohyun killing himself.

To be fair, the two President Kims came out mostly unscathed. And if recently stepped-down former President Lee Myungbak and current President Park Geunhye manage to escape a courtroom or prosecutorial investigation, they will be seen as successes.