Reports on UN critiques of South Korea's mandatory military service could be harbinger of policy change, and that in turn could be a boon to fertility in South Korea 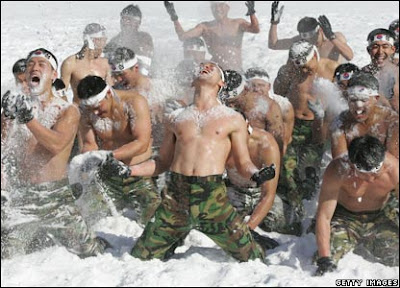 
More than nine out of 10 people being imprisoned worldwide for refusing to serve in the military on the grounds of freedom of thought, conscience, or religion are South Koreans, a report showed Monday.

According to the report released by the U.N. High Commissioner for Human Rights (UNHCHR) earlier last month, of the 723 conscientious objectors worldwide, 92.5 percent or 669 are South Korean nationals.

In South Korea, all able-bodied men are required to serve about two years in compulsory military, and conscientious objectors who refuse to serve without justification face up to three years in prison if convicted.

Noticeably, 17,208 South Korean male members of the Jehovah's Witnesses have been criminally punished since 1950 for refusing to perform in the military service for their religious beliefs, the report said.

The report said that many countries have either abolished or postponed mandatory military conscription, citing examples such as Germany and Croatia.

I'm not sure how I feel about the UN chiming in on this. South Korea remains in a declared state of war, and it is South Korea's continued readiness (or perception thereof) plus the guarantee of US intervention, that keeps North Korea (and its patron China) at bay.

But when the South Korean media starts putting out these stories, especially with comparisons with other countries, it likely signals the beginning of a dialogue on policy (if media stories and public opinion polls can be called such, in any country) that could eventually mean the end of mandatory service in favor of a voluntary professional military.

Frankly, I do like the UN's suggestion of providing an alternative civil service to military conscription for true conscientious objectors (like Jehovah's Witnesses), but I fear that such a change would be rife with abuse. And that in and of itself would be troublesome, not just because those with fewer economic or social means would probably end up more likely doing the tough military jobs, but also because a change in the status quo would remove the great equalizer that ROK military service represents: whether one is rich or poor, from Chŏlla or Kyŏngsang or Seoul, highly educated or poorly educated, every ROK male is expected to take time to do their military service (or some equivalent time in special civil service) unless they fall into a very narrow set of exemptions.

(Truth be told, what I'd really to see is a shortened national service period — say, eighteen months versus the current two years — that is required of all citizens, including females, that can be military service, volunteer service, or some civil service.)

So why is the media talking about military service at all? From discussions with policymakers and academics, I believe that one major impetus toward a change is that ROK military service hinders the fertility rate, which is abysmally low in the Republic of Korea.

Its Demography 101 that the longer the period is that people are screwing a spouse or would-be spouse who is fertile, the more babies they will produce on average (even with high abortion rates). But military service takes men out of some of the most productive years for their partner's fertility. At least for the two years or so they do military service and then longer as they try to finish up school and then seek work to pay for said children. (This is also a drag on economic output; South Korea pays a huge amount in real costs and social and economic opportunity costs with the current level of military readiness.)

Ending mandatory military service could tick up the fertility rate by a few tenths of a percent, which could have a dramatic impact on public policy in the coming decades. This may be an enticing idea as legislators realize that South Korea can't maintain the population on immigration and hopes for a unified Korea alone.

(And I should admit that the all-gender mandatory national service idea of mine would, at best, be a wash in terms of the fertility rate.)