Indiana Jones and the Low-Salt Diet

Indiana Jones news, plus the closest I will probably ever get to writing a fan fic:
The Los Angeles Times is reporting that a new Indiana Jones movie—what would be the fifth in the franchise and presumably the second in the post-War trilogy—is in the thinking stages:


Harrison Ford said Friday that momentum is building for a fifth movie in the "Indiana Jones" franchise and that George Lucas is already cooking up a suitable plot for a heroic senior citizen with a penchant for whips and fedoras.

"It's crazy but great," the 66-year-old Ford said. "George is in think mode right now."

To be honest, although I was looking forward to the most recent Indiana Jones flick, the one with the crystal skull where Shia LaBeouf plays a greaser, I was a little less satisfied than I'd hoped I would be.

That's not to say the movie was bad. I had also felt the same way about the second Indiana Jones movie, Temple of Doom: other than the opening scene involving the ice cubes and the diamonds on the dance floor, it didn't have the same heart as the first one, while the third seemed a bit more epic. But—and this is important—when I had the chance to watch the newest installment a second time (on a plane in one of those individual screens they have on Delta) I liked it better. In other words, it grew on me, which is good. 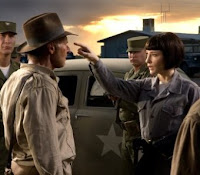 All in all, I wasn't particularly disappointed that I'd paid $10 to see Indiana Jones and the Kingdom of the Crystal Skull, and I'd happily pay $10 to see another Indiana Jones flick. This being a Korea-related blog, I'm hoping that maybe they'll have something Korea-related in it. The Korean War raging around the same timeframe could make for an interesting plot device (with a vintage feel, see pics here and here).
How's this for a MacGuffin: Indiana Jones is heading to some obscure part of the far-northern Japanese island of Hokkaido to meet a Japanese anthropology professor (a former college chum?) who had brought back some shamanistic piece he found in the isolated village where he worked in what is now North Korea (Chōsen Korea having been a Japanese colony for about four decades). While in Korea, he verified old legends that the tiger-shaped (?) charm had strange powers and he had kept it hidden because he didn't want his own country's vicious Imperial Army to get their hands on it, and certainly not the Russia-backed communists who took over the northern half of Korea when the Japanese surrendered.
The ancient Koryŏ-era Korean talisman is believed to bring the dead back to life, so naturally the forces of evil want to get their hands on it once they've caught wind of it. To find the other, larger part of the charm, Dr Jones finds himself posing as a Russian academic as he sneaks his way into the village. All the while he is being chased by North Koreans, Russians, and Chinese, the latter two which seem to be on the same side but are actually plotting against each other in order to snatch the talisman for themselves.
To add another nice plot twist, it turns out that a couple of the operatives from Moscow are actually scientists from the erstwhile Third Reich (hoping to double-cross the Russians and use the necromantic object to resurrect Der Führer*). To which a tied-up and in a seemingly hopeless situation Indiana Jones can say with disgust: "Nazis! I thought I was through with you guys." (You see, two of his first three films featured evil Nazis as a big part of the plot.)
To make the backdrop more exciting, the parts in North Korea can take place during the Korean War, specifically between the time that the UN-led forces and the South Koreans had pushed the Russian-sponsored North Korean forces almost all the way to the Chinese and Russian borders, and the time that the Chinese forces entered the war and pushed the UN, US, and ROK forces back across the Han River, south of Seoul.
This would leave Indiana Jones and whoever was helping him trapped behind enemy lines, making for an interesting escape—across battle lines or maybe even into the Soviet Union. Perhaps the advancing Chinese lines could even pass over them (watch the South Korean blockbuster Brotherhood of War [태극기 휘날리며] to see what I'm talking aobut). This being 1950 and 1951, it would be a prequel to IJ4, but still a chronologically appropriate time for Harrison Ford's current look. (If you choose not to use the Korean War as a plot device, making the timeframe after 1953 could involve resurrecting Stalin as well.)

Mr Lucas, you can have my idea for free (let's tentatively call it "Indiana Jones and the Cave of the Enchanted Tiger") if you make me a consultant—I have a master's degree in Korean Studies—so that we can avoid many of the culturally offensive things like those in Die Another Day (sex in a Buddhist shrine? Really?), that James Bond movie where the bad guy was a North Korean who had himself surgically altered to look like a White Brit. The film was entertaining and one of my favorites from the James Bond franchise, but it met with boycotts in Korea that cost the filmmakers many millions of dollars.
And if Indiana Jones V is not a prequel to Indiana Jones IV, my brother (with whom I saw the movie up in Yolo County) has some advice for Karen Allen: "If George Lucas calls you up and asks you to return to your role as a love interest for an action hero, lose some weight." 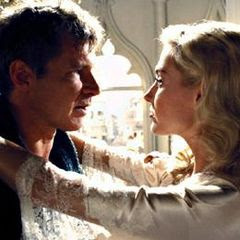 But if it is a prequel, go back to that formulaic element of having a totally hot love interest for Indiana Jones.

Dr Elsa Schneider (played by Ireland-born Alison Doody) in the Last Crusade, has forever since been one of my three ideals of a blonde hottie: smart, driven, gorgeous with her red lipstick and her vintage outfit. Okay, so she was a Nazi party member, but nobody's perfect. 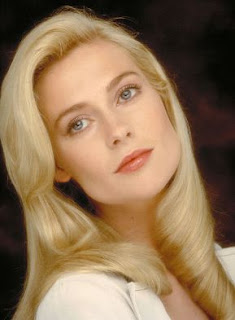 If V is a sequel to IV, get Shia a good love interest. Somebody who isn't famous yet, and preferably not an anorexic. Unlike 2008, young women in the 1950s actually ate three full meals a day.
Oh, and bring back John Rhys-Davies, who is still doing action films himself. No Indiana Jones movie is complete without Sallah.
*Hey, if IJ4 can be "X-files Lite," as my friend British James in Texas (BJiT) described it, why can't IJ5 also throw in an element of Boys From Brazil? Seriously, not sarcastically. 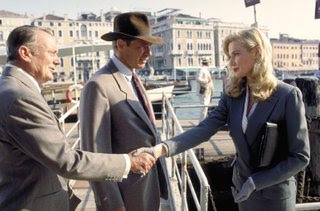