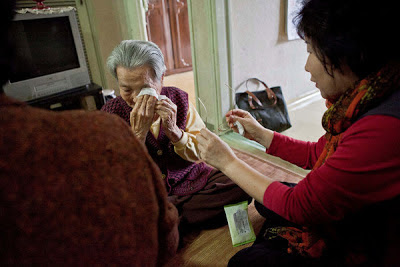 Choe Sanghun of the New York Times has an article on the rising number of suicides among the elderly, a byproduct of rapid industrialization that has eroded family values that had (until recently) negated the need for a proper pension and social security system for most people.


The woman’s death is part of one of South Korea’s grimmest statistics: the number of people 65 and older committing suicide, which has nearly quadrupled in recent years, making the country’s rate of such deaths among the highest in the developed world. The epidemic is the counterpoint to the nation’s runaway economic success, which has worn away at the Confucian social contract that formed the bedrock of Korean culture for centuries.

That contract was built on the premise that parents would do almost anything to care for their children — in recent times, depleting their life savings to pay for a good education — and then would end their lives in their children’s care. No Social Security system was needed. Nursing homes were rare.

But as South Korea’s hard-charging younger generations joined an exodus from farms to cities in recent decades, or simply found themselves working harder in the hypercompetitive environment that helped drive the nation’s economic miracle, their parents were often left behind. Many elderly people now live out their final years poor, in rural areas with the melancholy feel of ghost towns.

Such social shifts are not uncommon in the industrialized world. But the sudden change has proved especially wrenching in South Korea, where parents view their sacrifices as the equivalent of a pension plan and where those who are suffering are falling victim to changes they themselves helped unleash as they rebuilt the economy from the devastation of the Korean War.

“The family was always an extended self,” said Park Ji-young, a professor of social welfare at Sangji University in Wonju. “Children were everything they had for their future — for health care, financial support and a comfortable life in old age. Their children’s success was their success.”

As I've written many times before, the most egregious characteristic of suicide in South Korea is how it is widely acceptable as a noble exit, and is rapidly becoming "normative" and even seen as an act of bravery. It's already true among many of South Korea's overwhelmed students, and it may become the same among the elderly at the top of South Korea's inverted population pyramid.