Hold on a minute... I think we've lost count

I couldn't even tell you how many nukes North Korea has so far detonated. Starting with the second or third, I've adopted not just a ho-hum attitude, but blatant encouragement...


Why should we care at all if North Korea keeps shooting off missiles and blowing up its nuclear arsenal deep in its own tunnels? We should be applauding this, because it means that they are using up all of their weapons in a bid to get our attention.


North Korea's preparing for a third nuclear test, supposedly. And I say let 'em! Then taunt them that we thought that was just a bunch of TNT detonated in a mine shaft, so they'll detonate another one to prove us wrong. Lather, rinse, repeat, and eventually all their nukes will be gone. I should be president.

The nukes are also a bid to get our attention as well as our food aid (and this is what we should do with tyrant temper tantrums aimed at getting our attention).

But PBS's Newshour has me wondering if the tests may pose more danger than I've surmised. Qoting James Acton of the Carnegie Endowment for International Peace:


What we don't know is the size of the device. We don't know the material from which the devise was made. In fact, we don't even know definitively that this was larger than the previous two tests. It probably was. But it would take some time for the seismologists to estimate the yield accurately. ...

I think the test today marks a quantitative change. And it demonstrates that Pyongyang is moving along its arc of developing nuclear weapons that can threaten the United States. It already has ballistic missiles that can threaten the region. And if it can fit a nuclear warhead onto those, then it can directly threaten some of its neighbors. But it doesn't mark a fundamentally new departure. North Korea has already tested two nuclear weapons. It's tested plenty of missiles. Today marks an intensification of the threat, rather than a fundamental change in the nature of the threat.

If North Korea really can miniaturize a nuke, it might be time to recycle this old post about what would happen if a nuke were detonated in central Seoul, i.e., my house. 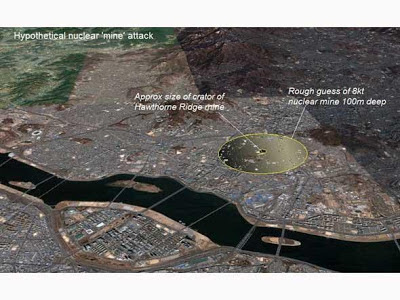 In fact, it seems (according to The Marmot's Hole) that some conservatives are doing just that, and they're also wondering whether or not South Korea should rethink its agreement with Washington not to develop nukes. South Korean development of nukes would not occur in a vacuum; it would quite possibly lead to Japan also getting them (not that Tokyo feels threatened by Seoul, but they don't want to be the last one in the neighborhood without them and they might feel a bit vulnerable under the US nuclear umbrella if their umbrella partner South Korea doesn't feel confident either).

Where it gets messy is that if Japan started getting nukes, then other countries like China would feel a need to ratchet up their military capabilities. Perhaps North Korea and Russia, too. Taiwan might feel the need in response to China. Before we know it, we have much the same powder keg as we would if they United States had left the region altogether (which would be a mistake we'd pay for dearly down the road), and everybody would be holding matches.

The only value I can see in South Korea pursuing nukes would be as a very serious incentive to get Beijing to rein in Pyongyang. But I'm not so sure they can anymore. (One would hope Beijing would finally pull the plug on their support of Pyongyang and initiate The Kushibo Plan, but I'm not holding my breath.)