Seoul food in the White House

I remember from my youth that home sale prices in Orange County would drop in value if kimchi were stored inside the house. That's why most kyopo homes had a special "kimchi fridge" out in the garage.

The lingering pungency of kimchi may be an issue in the 2016 presidential election, since it seems First Lady Michelle Obama has tweeted that they not only serve and eat kimchi in the People's House, but they actually make it there:


Last week, we picked Napa cabbage in the garden. Now, we're using it to make kimchi in the kitchen. Make it at home: pic.twitter.com/Y0L7dASZ

The attached picture even includes a simple recipe: 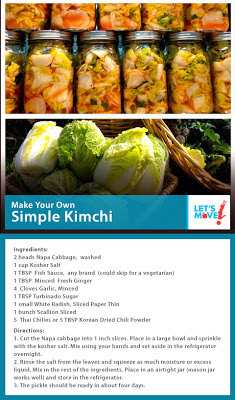 Who knew that FLOTUS was doing kimjang (the act of preparing kimchi for winter)?! Little does she know, but she just successfully pandered to the Korean American constituency big time. South Koreans are reportedly quite thrilled about this (and probably consider this alone to justify Obama winning the Nobel Peace Prize). [Note: Barack Obama's love of kimchi has already been documented.]

Anyway, if reading right-wing news sites has taught me anything, it's that this stinks of conspiracy: by flooding the White House with the stench of pickled vegetables, the Obamas are ensuring that no one will want the job of president in 2016, and the next term will be theirs! The kimchi is part of an elaborate ploy to become president-for-life.