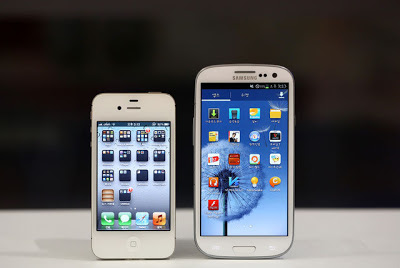 If there was any question that there was a duopoly in the cell phone game, it's gone. A recent study shows that Apple and Samsung accounted for 95% of all the mobile phone industry's profit in the last months of 2012.


Apple alone claimed 70% of the cellphone industry's total worldwide profit of $16 billion, while Samsung had 25%, according to a report released late Thursday night by Counterpoint Technology Market Research.

In third place was Nokia with 2%. That left the remaining 3% to be split by about 300 companies.

"Apple has essentially created the smartphone sector as we see it today and its combination of beautiful, easy-to-use products coupled with a rich content and application environment has enabled it to attract outsize profits," Couterpoint Research said in its report. "Only Samsung has come close to replicating this success."

The two leaders' shares of the profit pool are up from sharply from 2011, when Apple had 51% of industry earnings, followed by Samsung with 15% and Nokia with 12%, Counterpoint said.

Given that Samsung is a major components supplier for Apple's smartphones, that arguably makes the South Korean tech behemoth the predominant player. Sure, Apple's still the largest second largest company in the world, but with lackluster sales (or rather, less than super stellar amazing), some are arguing that the gild is off the lily at Apple.

Perhaps Apple should focus more on innovation in Cupertino than in the courtroom. They just lost another bid against Samsung, but one has to wonder if all the litigation isn't a drag on the company's creativity.