Yep, you read that right. Dennis "The Worm" Rodman is going to join the Harlem Globetrotters on a trip to North Korea for some reality show, where they're going to try to pry open the country and run a basketball camp.

From Voice of America:


Former U.S. basketball superstar Dennis Rodman has traveled to North Korea to help film a television show and engage in an unlikely cultural exchange in the Stalinist country.

Rodman and several members of the Harlem Globetrotters basketball team also plan to hold a series of basketball camps for North Korean children during the weeklong visit.

After landing in Pyongyang on Tuesday, the eccentric Rodman said he was just looking forward to "having some fun" in the notoriously closed state.

"It's my first time [to visit North Korea]. I think it's most of these guys' first time. So hopefully everything will be okay, and I hope the kids have a good time for the game," Rodman told reporters.

The U.S.-based Vice media group, which is leading the group, billed the trip as a "basketball diplomacy" mission. It said in a press release the visit will include activities aimed at encouraging "openness and better relations with the outside world."

Vice said the mission may also include a "top-level scrimmage" to be attended by Kim Jong Un, the young North Korean leader who took power following the death of his father in 2011. The event could not be confirmed. 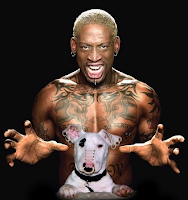 I agree we need a little more peresnorka, but if the North Koreans weren't already afraid of Black people, Dennis Rodman isn't exactly the best ambassador.

But maybe I underestimate the guy and his ability to keep it together. If you're worried that the former bad boy of the NBA can't behave in a conservative and isolated land known for its racial homogeneity, I remind you that he did live in Newport Beach.

Anyway, although I support "Plan B" type efforts to limit North Korea's financial transactions until they end their nuclear program and stop abusing their people or attacking the South, I do agree that cultural exchanges are an effective way to erode mutual distrust and animosity, which can lead to compromise and good will in the future. Kushibo is an optimistic pessimist.

UPDATE:
ROK Drop also featured this story. I expect One Free Korea will be unable to resist as well. So far, The Marmot's Hole hasn't covered it, because The Marmot is too busy focusing on the weirdly cute Bae Doona.