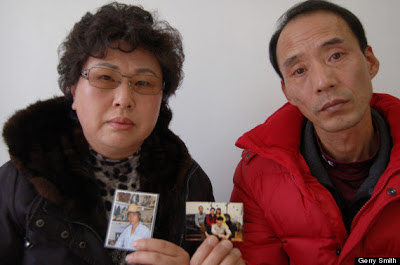 HuffingtonPost has an article on the killing of Hwangbum Yang, who was killed last year by somebody who really wanted his iPhone. The article uses Mr. Yang's case to highlight the wider problem of smartphone theft, which is apparently as much as a $30 billion a year business.


When Sunah Yang bought an iPhone for her brother two years ago, she warned him about the white earbuds.

Never wear them at night, she told him. They make you a target for thieves.

“Obviously, he didn’t listen,” she said in a recent interview.

Around midnight on April 19, 2012, Hwangbum Yang, a 26-year-old Korean immigrant and aspiring chef, finished work as a cook at an upscale Manhattan restaurant. He rode the No. 1 train uptown to the Bronx and started walking home in the rain.

He was two blocks from his house when a man holding a gun approached him, according to police. The man -- whom police would later identify as Dominick Davis -- demanded Yang's iPhone. When he refused, Davis shot him once in the chest. Yang died on the sidewalk.

Yang was still wearing the iPhone’s white earbuds when paramedics arrived, investigators told his sister. Davis had left his wallet untouched, but had taken his iPhone. Police later found the phone for sale on Craigslist for $400.

Prosecutors charged Davis and an alleged accomplice, Alejandro Campos, with murder. They have pleaded not guilty and are awaiting trial in jail on Rikers Island.

Nearly a year after Yang’s death, a cloud of grief still hangs over his family. His father sleeps in his son’s bed. His mother prayed at the scene of the shooting every day for four weeks until her husband asked her to stop. “It will only cause you heartbreak,” he told her.

Hyun Sup Yang attributed her son’s death to the insatiable demand for the world’s most popular phone. “If my son never had an iPhone,” she said in an interview, “he would be alive now.”

Yang’s murder stands as a chilling example of a modern-day crime wave sweeping the country, sometimes with deadly consequences. From New York to San Francisco to Washington, D.C., police have reported a surge in thefts of smartphones and tablet computers -- iPhones and iPads in particular. The spike in robberies has grown so pronounced that police have coined a term for such crimes: Apple picking.

Every day, criminals snatch phones on crowded streets, inside restaurants, and on subways, reselling their stolen wares on the Internet, on street corners and inside local convenience stores. Phone thefts tend to rise right after the release of new Apple products, according to police in New York City.

Last year, when "M's" iPhone 4S was stolen at a bus stop across the street from a police station in downtown Honolulu, I was really shocked at how little AT&T and Apple were willing to do to prevent that iPhone from being used in another country, where it was certainly headed (it was never turned on again within the US, according to "Find My Phone"), according to the Honolulu Police Department.

The gentleman from HPD explained that tourists — particularly Asian tourists — are targeted because the young kids who are "hired" do this for a few extra dollars are told that the Asian tourists all have insurance on the phones anyway, so nobody loses! ("M" is a grad student from Japan and probably looks a little distinct from local Japanese.)

Five-0 knows this, but is often helpless to do anything. An older haole (Caucasian) woman I met, who is local but looks like she could be a Mainland tourist, warned me about my own iPhone when I was in line at one of the three Starbucks locations in the Ala Moana Center area; the day or so before, just hours after purchasing a new iPad, it was stolen from her at the Macy's Starbucks location just three shops from the Apple Store.

If the thievery rings didn't have a market to resell these to people who want something cheaper and know they'll be able to connect a stolen device to their local network, then there'd be less "demand" among this criminal element. Sure, it wouldn't eliminate it completely (there's always idiots who don't ask questions when something's really cheap on Craig's List or eBay), but it could reduce it by a lot. There's no reason "Apple picking" should be a $30 billion industry, and it's horrible that people like Mr Yang would lose their life over it. I'm thankful that nothing more happened to "M" than losing some data.