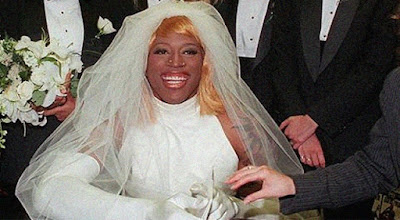 You'll have to forgive me, but because of the picture that they included – which I have posted above – I thought that this NK post was actually a joke. Sort of like they were trying to be The Onion only a more unfunny.

(It's very hard to write satire about North Korea, largely because the things that actually happen there are often so much stranger than what normally passes for satire. And frankly, lately The Onion is having trouble being Onionesque themselves; I'm thinking specifically of them having referred to a nine-year-old Oscar-nominated actress as a "C-U-next-Tuesday" so they could jump into the shock humor genre.)

Anyway, if the Xinhua story that it cites is true, that is a rather significant event, if the North Korean leader is allowing himself to be seen in public with an American figure who is not a politician, whether that's a boyhood hero or not. I sometimes suspect that the Swiss-educated Kim Jong-fun is trying to see where he can break free from his father's pattern wherever possible.

And that's a good thing.

UPDATE:
Here's the real picture of the two at the event, after which Mr Rodman said Kim Jong-un had in him a friend for life.