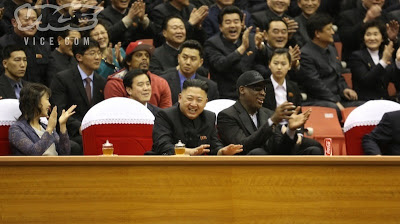 I guess if someone accused North Korean leader Kim Jong-un of being anti-US, he can now say, "Of course not; some of my best friends are American."


Add this to the controversial things that former NBA star Dennis Rodman has done over the years:

"You have a friend for life," he told North Korean leader Kim Jong Un on Thursday. Word of his comments comes from the VICE media production company that sent Rodman and members of the Harlem Globetrotters to the Stalinist state as part of an upcoming HBO series that will explore "news, culture and current events from all around the world."

Rodman, known as "The Worm," showed up with a small group of Americans in Pyongyang earlier this week.

According to VICE and China's Xinhua News agency, Rodman and the "supreme leader" sat together Thursday to watch a basketball game involving North Korea's top players and the three Globetrotters who are with Rodman on the visit. The Americans — along with VICE correspondent Ryan Duffy — were divided between the two sides. The game reportedly ended in a 110-110 tie.

Xinhua reports Rodman said after the game that "although relations between the two countries are regrettable, personally I am a friend of Marshal Kim Jong Un and the DPRK people."

That was quite diplomatic of the Harlem Globetrotters to engineer a tie game. (And smart, too, which means they might have read about Euna Lee and Laura Ling's time in the Pyongyang Palazzo.)

So forget the picture at this post, the real picture shows the Young General having a good old time with his new buddy. And seriously, I just find it hard to believe that this is not a sign that there is some potential for Kim Jong-un to one day say, "Screw this!" and give up on the whole pariah state thing so he can have a Coke™ and a smile.

But lest this public relations coup make us forget how far the North really has to go, lest we forget that Tommy Boy is head (nominal or actual) of a very brutal regime, the NPR piece goes on to explain precisely that, by citing Human Rights Watch:


"Arbitrary arrest, detention, lack of due process, and torture and ill-treatment of detainees remain serious and pervasive problems. North Korea also practices collective punishment for various anti-state offenses, for which it enslaves hundreds of thousands of citizens in prison camps, including children. The government periodically publicly executes citizens for stealing state property, hoarding food, and other 'anti-socialist' crimes, and maintains policies that have continually subjected North Koreans to food shortages and famine."

Yep. And you can get killed for passing out Bibles.

Major buzzkill. Let's hope KJU or his Chinese benefactors try to do something about it.