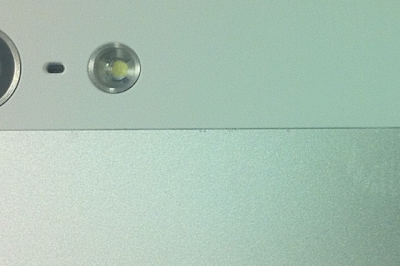 I kinda sorta expect perfection when I buy an Apple product. If there are to be dings, scuffs, and scratches, I'll be the one who puts them there, thank you very much.

So I was a bit dismayed when I took my iPhone out if the box today and saw the above imperfections where the aluminum back meets the glass part (toward the bottom, there are no such flaws). While aesthetically they are hardly noticeable, it makes me wonder if there's some other, less visible problem lurking below the surface. You know, the kind of problems that can pop up when you're trying to make five million units of something in a very short time, at a factory thousands of miles away in China.

This is not a worry without basis. Two years ago, about six weeks after purchasing my iPhone 4, it started buzzing ceaselessly. The Apple geniuses (boy, doesn't that sound sarcastic) had never seen the problem before, but they switched me out to a new unit as soon as they got one shipped (they were still in short supply). Since then I had no problems. Perhaps I'll consider the same. (In my lengthy experience, Apple is very good about adequately fixing or switching out things that seem to have something wrong with them, which is good because even Apple makes lemons.)

Anyway, this is my first time having Siri on my own phone. With my iPhone 4, I was used to squeezing the mic and saying things like, "Call David Park mobile," and I proceeded to do the same with Miyoung.

To which Siri replied: "Fine. From now on I'll call you 'Young-mobile.'"

UPDATE (December 7, 2012):
It took a while (no fault of Apple's) but I finally got a replacement. About three weeks ago, while studying at Starbucks in Kahala Mall, I walked into the Apple Store to ask a question about when my iPad's one-year warranty ends and I also pointed out the flaw in the back of the phone as well as its tendency to get hot when doing routine tasks. The genius there said the chips in the back may be an indication of mismatched parts, and who knows what else might be wrong with the device. He told me my phone would likely be "swappable" but I was unable to do it at that time because I hadn't done a recent backup.

Fast-forward to yesterday when I finally had the time to sit down and back up while waiting for a Genius Bar appointment at Ala Moana Shopping Center. The Apple Store genius there seemed a bit more skeptical, but she agreed that the weird chips in the back might be sufficient to swap it for a fresh one. I hardly had to convince her that I was paranoid that my first-day batch iPhone5 might have problems lurking within its hardware, like my first-day batch iPhone4.

The upshot is, I got a brand new device that is mark-free. It was nice of them to do this, considering that I had made a large ding in the corner of my iPhone5 prior to getting a proper case for it. This new one doesn't seem to have the heating problem of the first one, but we'll see.