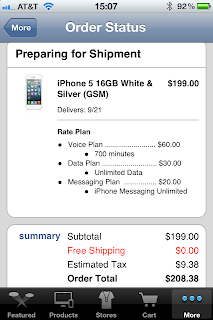 I like getting new toys, and I'm happy to be getting the new iPhone 5 that will replace my iPhone 4 (I'm not such a fanboy that I get a new phone every year; in both Korea and Hawaii I've replaced my LG handsets and Apple iPhones about every two years since my first phone in 1998).
With my status still set at "preparing," I'm not sure if they can get it from China to here (Hawaii) in just three days, if it takes the same route as other Apple products I've purchased online. My engraved iPod Shuffle went from China to Alaska to California and finally here, taking four days.

But I have faith in Apple to meet their commitments. In fact, last year "M's" iPhone 4S arrived here in Hawaii the day BEFORE the release date, despite similarly sparse information.

I just hope it gets here soon. M's iPhone 4S was stolen and she's using her three-year-old 3Gs until I get my new phone and temporarily (until she can upgrade) lend her my two-year-old iPhone 4, for which I waited in line for four hours one chilly June morning on the day if their release at the AT&T stores. I kinda miss the camaraderie of the waiting-in-line thing. A very cool guy brought us coffee and donuts at the Los Angeles County store in California.

One thing I learned, though, was to not buy iPhones and other subsidized smartphones in California, where you're taxed at nearly 10% for the UN-subsidized price, over $50 on a $649 device. Note that in Hawaii it was about nine bucks.
on September 19, 2012