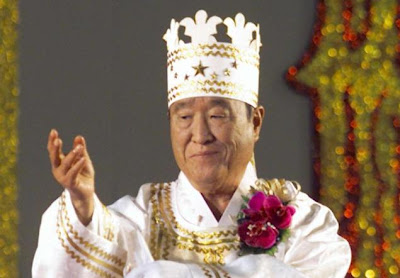 Reverend Sun-myung Moon, the brightest star in the constellation of non-mainstream religious organizations in Korea (read: cults), has died. He was old, like teenager during the Great Depression old.

Reverend Moon is a complex figure who evokes positive and negative responses from different people, and sometimes even from the same individuals. On the one hand, he ran a giant heterodox church (read: cult) that had a tremendous amount of influence (with ownership of conservative news outlets like The Washington Times), connections, and power. There was a scandalous book entitled In the Shadow of the Moons by a Moon daughter-in-law that described the abuse she experienced within the family and estrangements from the Moon daughters.

On the other hand, well... On the other hand... um... Almost all the Moon followers (they hate being called "Moonies") that I've known from Korea have been really nice people. Like Mormon nice. (I know virtually none outside of Korea, but they could be like gay people in that they are what they are but they don't feel compelled to share that with everyone, in part because of perceived stigma.)

I've lived in Korea off and on since I was a teenager, and when I was much younger (pre-1998 economic crisis days) it seemed a high percentage of White foreigners with no familial connection to Korea were Unification Church members. Or Mormon missionaries. Or the military. It was a completely different world from today, where working in Korea seems only slightly more exotic or adventurous for a typical twenty-something North American than becoming a barista at the local Starbucks.

At any rate, a disproportionate number of "famous foreigners" in Korea were either Moonies or Mormons: Kyŏngsang dialect-talking Robert Holley and Lee Charm (the Tourism Minister) and self-styled TV clown Isaac Durst come to mind. Lee Charm in particular is a nice guy.

So I wonder if a heretical faith (read: cult) can be all bad if so many of the members seem like all right and upstanding people. I rarely talked about their faith with them (I have my hands full just being a Protestant/Catholic hybrid) but in other matters, I had no problems with them.

The only thing that really intrigued me about the Unification Church was their apparent emphasis on interracial unions, on display during the occasional "mass weddings." Korea today is far more open to 국제결혼 (i.e., interethnic marriage, literally international marriage) than it was just fifteen years ago, and Reverend Moon was nothing less than a pioneer in that regard.


At a time when dominant cultural discourse emphasized the virtues of Korea's "homogeneity," Moon was pairing Korean men and women with Whites, Blacks, Southeast Asians, Latin Americans, etc., etc. A retired USFK friend from New York City, "C," who became quite cynical about religion during his time as a chaplain's assistant, was convinced that the real motivation behind all the interethnic couplings was not to promote global peace and love but to help the Unification Church permanently marginalize those wedding participants from their families, who would presumably reject their new son- or daughter-in-law because he/she was not Korean (or whatever race/ethnicity they were) so that the new couple would cling more closely to the Unification Church family.

Anyway, I have no idea what Unification Church doctrine says will happen to Moon Sun-myung now that he's dead. I just hope Jesus and his Dad have a good sense of humor. I'm pretty sure they are the forgiving type.