A prominent name in the K-blogopshere sent me a link to this Japanese smartphone app, which features a cute girl staring at you ichinichiju and occasionally making comments appropriate to the time of day, plus some random ones ("I want to go to the onsen!"). 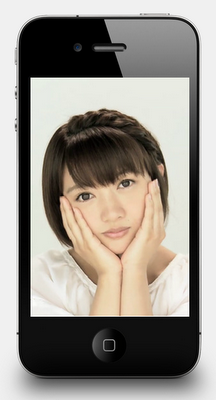 Though some may find this quite strange, it does not surprise me because, for some reason, I thought this already existed.

After all, the whole point of a smartphone is that it incorporates into a single high-tech device all the devices and other things we had (or wished we had) elsewhere in our life. My iPhone is an encyclopedia, a map, a music player, a camera, an address book, a little black book, a ticket holder, a wallet, a handheld game machine, a restaurant guide, a word processor, a flashlight, a television, a newspaper stand, a magazine rack, a sports page, an insurance card, a sex offender locator, and yes, even a telephone.

So why not also include a girlfriend staring longingly or inquisitively back at you, as every other girl I've dated was wont to do? (Kushibo is frickin' adorable, and also occasionally has spinach in his teeth.)

Let's face it, in a world of demographic collapse like Japan, where there are 23 octogenarians for every 2 workers and 432 eligible men for every 100 available women (disclaimer: I pulled those stats out of my butt, but I'm pretty sure they're accurate), we are going to need to jerry-rig society with technological workarounds and altered expectations so that the men who lose out in the affection lottery can still feel loved and not turn into violent sociopaths. Ditto with Korea, where it is only 328 eligible men per 100 available women, but only a fraction of those women would ever consider dating you.

So while my K-blogging friend claims this is proof that Japan is "still home to 70% of the world’s weird shit," I say that country is presciently prudent in its efforts to invent ever more realistic sex toys (today's second reference to pulling things out of one's butt) and develop robots to take care of the elderly.

Heck, Korea should be embracing this path. Because what could possibly go wrong with robots?

Or a girl staring app?