Travel & Leisure, a magazine that usually promotes places where you can travel and enjoy leisure, has a piece on "the world's most dangerous countries to visit."

North Korea made the list, naturally. And I say "naturally" not because it's dangerous, but because Hermit Kingdom 2.0 is perceived as dangerous for travelers, even though it actually probably isn't. I'm willing to bet a typical tourist is more likely to get out of Pyongyang alive than Oahu (we've got sharks). 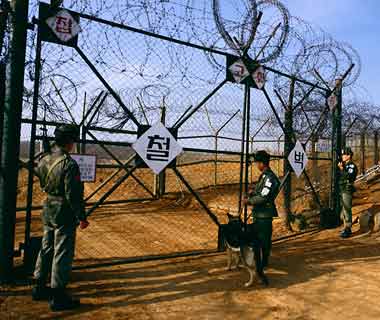 The Great Fright North as a state is clearly dangerous, to its neighbors and especially to its people, but does that translate into being dangerous for tourists? Granted, there is that infamous case of a South Korean traveler visiting the Kŭmgangsan (Diamond Mountain) resort who was shot in the back when she ventured off the reservation.

And then we have the case of the accidental tourists. I'm referring to the Stupogants™ who willfully crossed into North Korean territory hoping not to get caught, in the case of Laura Ling and Euna Lee, or wanting and expecting to get caught, as in the case of Robert Park and later Aijalon Gomes. All four of them had unpleasant visits, but they were, in the eyes of North Korea, illegal aliens and highly undesirable visitors.

But what if you're on a tour to Pyongyang or Kaesŏng or the DMZ or Mt Paektusan (if they go there from the North Korean side)? Are you actually in a great amount of danger as a tourist?

With its low crime stemming from the tight control of the regime, I'm guessing the answer is not just no but may be the opposite.

But as usual, what passes for reporting on North Korea ends up as little more than a caricature of what has already been reported. Superficial is funnier, I guess.

Now, to be fair, I have never set foot in North Korea except the five meters or so at the Joint Security Area in P'anmunjŏm where you can mill around that one building that straddles the border. Perhaps until I go there myself my own opinion is just as superficial, but it is informed by people who have traveled there, and they generally say the place is eerie but not dangerous.