Did Superstorm Sandy save Obama from defeat? 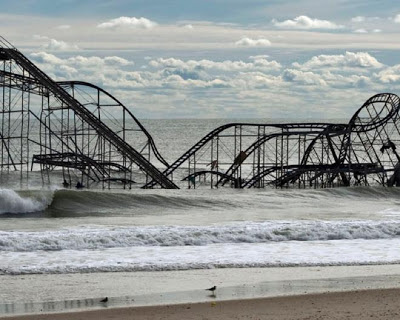 That's certainly the refrain coming from the Republican side, where pundits and planners made the mistake of falling for their own propaganda and were certain that Governor Romney would not just eke out a win but would crush President Obama in an electoral landslide.

(As we now know, the only landslide they effected came from Bull$hit Mountain.)

So rather than admit they were foolish to demonize Nate Silver and instead believe poll outliers Gallup and Rasmussen (which systematically overestimated the share of Republicans in the "likely voter" pool), they have to blame it on something else. And Hurricane Sandy, which shut down the Romney campaign and blunted his "momentum," is the scapegoat.

Never mind that the Obama campaign machinery was also sidelined during the once-a-century storm. True, the superstorm response gave Obama a chance to look presidential, but what was really at work was that folks were reminded of Romney's call for FEMA (Federal Emergency Management Agency) to dismantled and disaster response thrown to the states and/or the private sector.

Is that fair? No. Not at all. No one had forced Romney to say those words or take that position. Is it fair that Obama gets all that credit? Yes, just as it would have been fair for him to be skewered had the Federal response been a huge screw-up.

As Nobel laureate economist Paul Krugman writes in the New York Times, Obama deserved whatever boost he may have gotten:


The point is that after Katrina the government seemed to have no idea what it was doing; this time it did. And that’s no accident: the federal government’s ability to respond effectively to disaster always collapses when antigovernment Republicans hold the White House, and always recovers when Democrats take it back.

Consider, in particular, the history of the Federal Emergency Management Agency.

Under President George H. W. Bush, FEMA became a dumping ground for unqualified political hacks. Faced with a major test in the form of Hurricane Andrew in 1992, the agency failed completely.

Then Bill Clinton came in, put FEMA under professional management, and saw the agency’s reputation restored.

Given this experience, you might have expected George W. Bush to preserve Mr. Clinton’s gains. But no: he appointed his campaign manager, Joe Allbaugh, to head the agency, and Mr. Allbaugh immediately signaled his intention both to devolve disaster relief to the state and local level and to downgrade the whole effort, declaring, “Expectations of when the federal government should be involved and the degree of involvement may have ballooned beyond what is an appropriate level.” After Mr. Allbaugh left for the private sector, he was replaced with Michael “heckuva job” Brown, and the rest is history.

Like Mr. Clinton, President Obama restored FEMA’s professionalism, effectiveness, and reputation. But would Mitt Romney destroy the agency again? Yes, he would. As everyone now knows — despite the Romney campaign’s efforts to Etch A Sketch the issue away — during the primary Mr. Romney used language almost identical to Mr. Allbaugh’s, declaring that disaster relief should be turned back to the states and to the private sector.

And therein lies the difference between the two philosophies. The Bush43 and Romney administrations did/would not properly prepare because they see no need for an effective Federal response to natural disasters until it's too late, and they are hellbent on dismantling government programs wherever they can because of a bias that government programs are, by definition, major screw-ups.

I submit that the reason Republican politicos see FEMA as a grossly mismanaged agency is because they were the ones grossly mismanaging it. They harp about how the government can't do anything right and when they get into power they go about proving it.

Democrats, on the other hand, are in love with Lincoln's philosophy that "government should do for people what they cannot do better by themselves" (I deliberately omitted Lincoln's only right before they, because, after all, we're talking about Democrats).

So it's not random luck that a "perfect storm" roared across the Eastern Seaboard a couple days before the election. Luck is when preparation meets shit happens opportunity, and Obama was prepared in a way that Romney would not have been. And that is what made people see Obama as more presidential. That was where Sandy may have clinched it for Obama (never mind that Romney's "momentum" had already petered out and was reversing, but that's another post for another time).