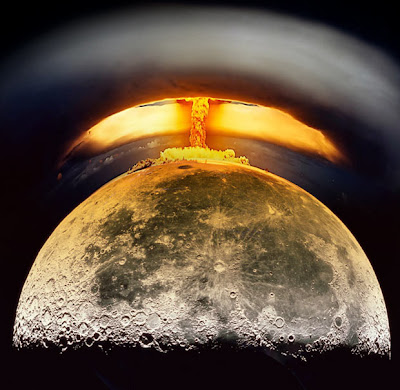 We live in a time when truth really is often stranger than fiction.

We are just now finding out that the US had planned to scare the bejeezus out of the Soviets (not that they had a whole lot of bejeezus to begin with) by... wait for it... blowing up the Moon.

What makes this story even more fun is that this old story was dredged up by... wait for it... The Sun:


America planned to blow up the moon with a nuclear bomb in the 1950s, reports have claimed.

US Military chiefs were reportedly keen on the sensational plot as a show of strength to intimidate arch-rivals Russia at the height of the Cold War.

The secret project was codenamed A Study of Lunar Research Flights and given the nickname Project A119.

The classified plan was to attach a nuclear device to a missile and launch it 238,000 miles to the moon.

The bomb would then explode on impact and the flash could have been seen from earth.
Physicist Leonard Reiffel told Associated Press that the plan was to "intimidate" the Russians and boost morale in America.

A nuclear bomb was chosen because a hydrogen bomb, the most powerful in the US arsenal, would have been too heavy to fly to space.

However the plan was ditched because of a number of fears over safety, including what effect the blast would have on the Earth.

Scientist Carl Sagan was involved in the project and was responsible for calculating what would happen to the moon dust and debris if there was such an explosion.

If this is true (and I'm not so sure it is), I just don't what to say. Except that it is arrogance like this that doesn't exactly win hearts and minds.

I don't have anything really Korea-related to add here, except that North Korea seems to be going a similar route with its own nuclear intimidation: scaring the crap out of its neighbors by nuking deep holes in the ground.