Nevertheless, I still feel good about firing him from that particular role.

UPDATE (1:16 pm HST on November 6, 2012):
If you read this post about five minutes ago, you may have noticed that there was a Hawaii state ballot in place of the picture above. I took it while I was in the voting booth, though I posted it after I was done voting.

"M," who is from Kansai, in Japan, and cannot vote in the US at all for the time being, texted me that I may want to reconsider having posted a picture of my ballot. Apparently, this is illegal in some states, possibly including Hawaii, where showing your ballot to another person may be grounds for it being thrown out.

Whether or not one is able to post a picture of their ballot differs from state to state. Some organizations encourage people to photograph (and post) their ballot as a way to prevent fraud by those who collect and count the ballots. Not being able to post pictures of your ballot may come from a time when people could be intimidated if their voter preference was known (which I guess can still happen).

This is the first time since the 1990s that I've voted in person, owing mostly to being in Seoul, where I voted absentee in every election (as long as Orange County got me my ballot in time, which was not always). And in the past, I've not only photographed and posted my ballot, but I've also given a description of my voter choices. Such as in 2008, when I wrote New Mexico Governor Bill Richardson's name in for president, as a protest against then-candidate Barack Obama using Korea and Japan as whipping boys in his stump speeches. 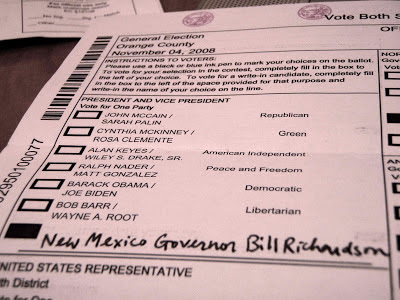 I never got in trouble for that, and I figured that the right to proclaim for whom you voted was as solid as your right to keep your ballot utterly secret. I figured we had the right to choose.

Anyway, voting in Hawaii is probably not as fraught with the problems voters face in other places, like Ohio and Florida where there are long lines for "early voting" and there have probably been long lines all day today.

At my polling place, I literally waited no more than five seconds. I was required to show ID, and for a minute there I was worried I might be prevented from voting because this semester I moved for the first time since I lived in Honolulu and I haven't yet changed two of my three major forms of ID (a Hawaii state ID and a California driver license which has my Honolulu address on it; my student ID does not have an address). A California driver license takes a few weeks to get in the mail, while a Hawaii state ID takes a three-hour wait in line at a downtown office.

But they took my word for it that even though my IDs say "Turtle Bay Drive" I actually live on Aulani Avenue. Just took my word. I'm guessing that if I were an elderly Black man in certain Ohio or Florida counties, my right to vote would have been challenged. In the interest of preventing voter fraud. (Real voter suppression is not a problem if you're combatting imaginary voter fraud.)

Something you would have seen in the picture of the ballot I took down is the list of Office of Hawaiian Affairs candidates. Although I was eager to vote for a mayoral candidate who (a) is in favor of the Honolulu railway project and (b) is not his corrupt opponent, I did not feel I was informed enough to make a decision about that particular office. I did vote for all my representatives and a handful of ballot initiatives.

Anyway, it feels good. In an hour or so, I'll go and watch the results come in, simultaneously on NBC and on Comedy Central.