So, it wasn't the fan...it was the air purifier!

Turns out all those cases of "fan death" may have been from the air purifier right next to it.

A research team at UCI (University of California, Irvine, my alma mater...Go anteaters! Zot!) has found that air cleaners using a popular process called ionization can actually generate ozone levels in a room that exceed the worst smog days in Los Angeles (which is much worse than in Orange County, where our air smells lemony fresh).

The devices, popular in Korea, are touted as getting rid of dust, pollen, and other airborne particles. The ionic air purifiers are said to work by charging airborne particles and then attracting them to metal electrodes. They emit ozone as a byproduct of this ionization process.

According to the study, in a small and poorly ventilated room, the ozone adds to existing ozone and creates potentially unhealthy concentrations.

A chemistry professor at UCI who ran the study said that people operating air purifiers indoors are more prone to being exposed to ozone levels in excess of public health standards.

Ozone high in the atmosphere protects Earth from damaging ultraviolet radiation, but down on the planet's surface, it is a major component of smog. Ozone can damage the lungs and cause shortness of breath and throat irritation, and it can also exacerbate asthma.

Professor Sergey Nizkorodov and his colleagues tested various air purifiers in homes, offices and cars. In many cases, ozone levels inside climbed above 90 parts per billion, exceeding California's basic safety threshold. In some cases, ozone soared higher than 350 parts per billion, which if measured outside would trigger a Stage 2 Smog Alert, an event that hasn't occurred in the Southern California coastal air basin since 1988. 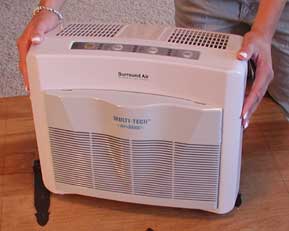 California lawmakers are considering legislation to reduce emissions from indoor air purifiers. Meanwhile, both the state and the U.S. Environmental Protection Agency have issued advisories discouraging their use. Said Barbara Riordan of the California Air Resources Board last year:

These machines are insidious. Marketed as a strong defense against indoor air pollution, they emit ozone, the same chemical that the ARB and … U.S. Environmental Protection Agency have been trying to eliminate from our air for decades. More chilling is that some people susceptible to the ill effects of ozone will eagerly bring these Trojan horses home.