The World According to 까르푸 (Carrefour)

Note to visitors from India (November 28, 2008):
Over the last week, I've been getting numerous hits from Bhubaneswar, Orissa, to this post. They started with someone Googling "what Koreans think of Carrefour." I guess there's a Carrefour going up (already up?) in that Indian city. If you have a specific question about Carrefour in Korea, please feel free to email me and ask.
ORIGINAL POST:
This is one of those stories that flies below the radar, but the closer you look, the weirder it gets.

Carrefour (pronounced ggarŭpu in Korean) is leaving Korea. Why? Because the number-four retailer has a policy of leaving a country if they are not number-three or better. In world rankings, they are number two, after WalMart. In fact, they are sometimes called the WalMart of Europe: all the surliness of the American WalMart, but without the uninsured staff.

So Carrefour announced it was leaving. Lotte, which had hopes to expand LotteMart, was one suitor. Samsung-Tesco, which runs Home Plus, was also hoping to buy out Carrefour's thirty-two stores and expand that way. But lo and behold, E-Land, famous for inexpensive, halfway decent clothing, has bought them out. For a cool 1.75 trillion won ($1.85 billion at current rates). 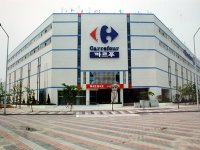 I feel for Carrefour and its struggle to do well in Korea's hyper-competitive discount retailing sector. With Shinsegae's E-Mart chain, LotteMart, Home Plus, and also-ran WalMart all vying for Korea's shoppers, it can be tough going.

But it's not as if this was a tough nut to crack and Carrefour wasn't up to the task. Have you ever walked into a Carrefour? They're crawling with people! Anytime of the day or night, they've got crowds.

So they didn't make it to the top-three...boo-hoo. Maybe Korea's market is different enough from that in Europe that a number-four showing—and massive expansion nonetheless—was good enough. Changing their name to CarreMart would have been a better move than jumping ship. And it's not like they are struggling just in Korea (if you can call it struggling), since they are also having "troubles" in Japan as well. Maybe they need a different way of thinking about how they approach affluent East Asian markets.

I'll be sad to see them go. I happen to like the place. In addition to the usual suspects—cheap stuff and lots of it—they often carried a lot of neato specialty items that the other chains didn't. The same is true of WalMart (or was true the last time I set foot in one), but WalMart in Korea always felt sort of icky. It's like they didn't care how the store came across.

Anyway, the story is getting even weirder, as I said. Now the ROK tax agency is launching a probe into the deal. Apparently, a clause in the Korea-Netherlands tax treaty (but not in the Korea-France tax treaty) may allow Carrefour to escape taxes on profits from property sales.

So what does the tax agency do? Confiscate massive amounts of records. Records that, judging from the article, may seem to have little to do with the tax issue but lots to do with management and operations.

This is just my gut feeling, but this stinks of the far left's attitude that it is better to eat the rich than to be like the rich. It's some great sin to make money—even if it's done legally and ethically—and they will make sure all will be punished for making a buck.
UPDATE (October 2008):
Carrefour's move out of Korea and into China? A roaring success!
on May 01, 2006