Hundreds of ticket-holding Superbowl fans turned away because seats don't pass fire code; K-blogosphere mocks NFL organizers and questions whether US is up to task of hosting Superbowl 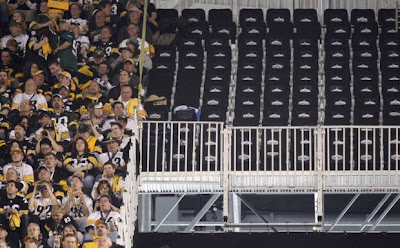 Well, the first part is true, but the second part is not.

But the second part is what might have happened had the same fiasco occurred in a Korean stadium, based on what swirled around the anglophone blogs when (among other problems that are not too terribly atypical of massive events, like traffic tie-ups, transportation snafus, and a dearth of rooms) loads of seats were not yet ready for the Formula One in Yeongam last fall.

I say kudos to the Fire Marshal for not signing off on the temporary seats. It would royally suck to spend so much time and money to travel across the US in snowmaggedon and have to watch the game in a "hospitality tent," but that would sure beat whatever disaster might have occurred if those rickety seats were filled by football fans the size of, say, those people on the right who actually got seats.

And it was a good game, by the way, even if Korean hero Hines Ward didn't pull out a victory in the end.