Growing up in Southern California, the mountains to the north, which reach over 10,000 feet in some places (Mt Baldy, Mt San Gorgonio, etc.) would get enough snow for moderate skiing (maybe Los Angeles should hold the Winter Olympics if things go south in Sochi). Orange County, whose Mt Santiago (aka Saddleback Peak) is over a mile high, would also get its share of the white.

But tonight they are expecting snow flurries down to 1000 feet, and possibly even 500 feet. That covers a lot more Southern Californians than usual. For a change, a white dusting around the Hollywood sign won't be an illegal import, while farther north San Francisco may get its first snow in thirty-five years.

UPDATE:
The snow has begun falling (this link includes records of when snow last fell in various parts of the Los Angeles area's low elevations). 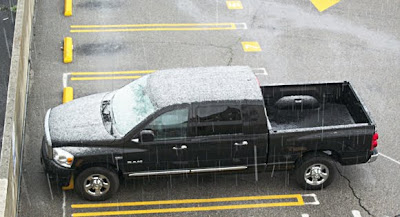 UPDATE 2:
The official snow level only reached down to 1700 feet, but people below apparently got dusted. The above picture is downtown Los Angeles, whose buildings' base is only a couple hundred feet above sea level. 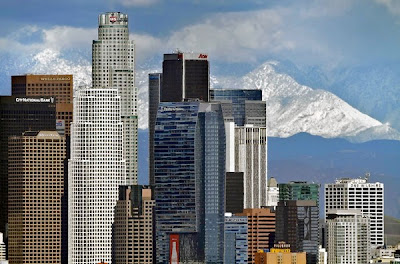 Meanwhile, down in Orange County, this happened to be the first day of lifeguard tryouts. The would-be lifeguards had to brave the water — which is cold even in the summer — amidst 40°F temperatures (about 4°C or 5°C). These are not polar bears; they are the unemployed. 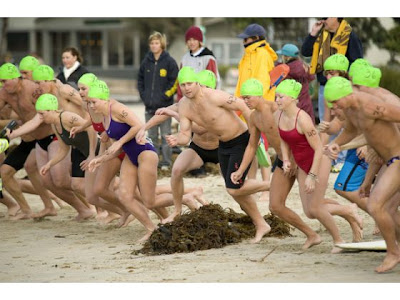